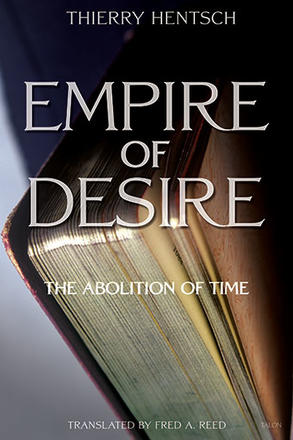 By Thierry Hentsch
Translated by Fred A. Reed

Empire of Desire, the second volume of Thierry Hentsch’s epic survey of the formative texts of the Western narrative tradition, completes the work he began in the first: Truth or Death. It traces western civilization’s quest for immortality across a further four centuries?from ... Read more

Empire of Desire, the second volume of Thierry Hentsch’s epic survey of the formative texts of the Western narrative tradition, completes the work he began in the first: Truth or Death. It traces western civilization’s quest for immortality across a further four centuries?from Molière to Proust, by way of Voltaire and Rousseau, Goethe and Hegel, Melville and Joyce?ending in 1922, coincidentally the year Ulysses was published and Marcel Proust breathed his last.

Truth or Death had revealed how the Biblical imperative of salvation gradually and systematically transferred the quest for immortality from the religious to the profane, as technoscience came to supplant God in the ?age of reason. ”

Now, in Empire of Desire, Thierry Hentsch presents ?modern man”?freed from the imperative of transcendence?as a creature who ?desires to desire, moving without cease from one object to another, in a state of self-imposed oblivion,” the Western narrative tradition reaching its apotheosis with the work of Marcel Proust, in whose exquisitely crafted prose, desire has become the artist’s instrument of choice?the vivisectionist’s scalpel.

Thierry Hentsch’s untimely death in 2005 has left us, as his generous bequest, a vivid, multi-faceted literary testament. Proust, foreshadowing the title of the mortal bargain, Raconter et Mourir ?to tell the tale, and to die?brings Hentsch’s reading of the Western literary tradition full circle. Proust, ?in whose company despair can find no finger-hold, in whose company I learn with every passing day that literature is nothing more than life reflected upon, recaptured; that it is the expression?an expression that takes one’s breath away?of those simple instants that poets have sought after since time out of mind, and whose fleeting yet powerful pleasure give us, for a spark of eternity, the feeling that we ourselves partake of the abolition of time. ”

Thierry Hentsch
Swiss-born Francophone author Thierry Hentsch carried out various diplomatic missions for the International Red Cross in Syria, Palestine and Pakistan. An expert in intercultural relations, especially between the East and West, he published many incisive journal articles, reviews and collections, which have appeared in Conjonctures, Études internationales, Spirale and Le Monde diplomatique. His extensive research efforts culminated in L’Orient imaginaire [ Imagining the Middle East ], a much-heralded 1988 publication in which Hentsch provides a solemn critique of the Western perception of the Middle East and reflects on the construction of Western literary, cultural, philosophical, and political identities in relation to the ?other.”

Fred A. Reed
International journalist and award-winning literary translator Fred A. Reed is also a respected specialist on politics and religion in the Middle East. After several years as a librarian and trade union activist at the Montreal Gazette, Reed began reporting from Islamic Iran in 1984, visiting the Islamic Republic thirty times since then. He has also reported extensively on Middle Eastern affairs for La Presse, CBC Radio-Canada and Le Devoir. Reed is a three-time winner of the Governor General’s Award for translation.

Other titles by Thierry Hentsch