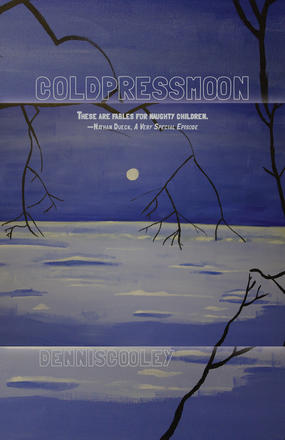 Deep in the woods, way down the well, in the darkest, dampest parts of story, Cooley spins out his web. Like the best and most magical of fairy tales, cold press moon catches our anxieties and hopes, glimmers with mischief and mystery, and gloms onto something like truth. Romantic ... Read more

Deep in the woods, way down the well, in the darkest, dampest parts of story, Cooley spins out his web. Like the best and most magical of fairy tales, cold press moon catches our anxieties and hopes, glimmers with mischief and mystery, and gloms onto something like truth. Romantic and irreverent, playful and profound, these poems work like spells to wake the vital heart.

Dennis Cooley was raised near Estevan, Saskatchewan. He is currently an English professor at the University of Manitoba and resides in Winnipeg. He is a founding editor of Turnstone Press.

Put up your broken, bloody feet, let your long, golden hair down, and take a deep huffing, puffing breath, folks. Gather round the boiling cauldron in the campfire as Dennis Cooley retells tales conjured by the Brothers Grimm and rewrites stories concocted by Mary Shelley and Bram Stoker. The poems in Cold-Press Moon manipulate and mutate archetypes we've played with for ages: this Orpheus dares the Maenads to tear him apart, the gold of this Midas is rendered worthless, and the princess presents this Frog Prince the kiss of death. These are fables for naughty children.
--Nathan Dueck, A Very Special Episode

The world is made of monsters and Cooley bares this truth in dark tales parsed through poetry, twisting fairytale and fable.
--Jonathan Ball, The National Gallery

Cold Press Moon is Dennis Cooley at his most sinister and seductive, undressing fairy tales to their bare bones, and then riding their skeletons into a land where animals speak gentle truth, and humans wax proclitic. A beautiful truncation.
--Aritha van Herk

Other titles by Dennis Cooley