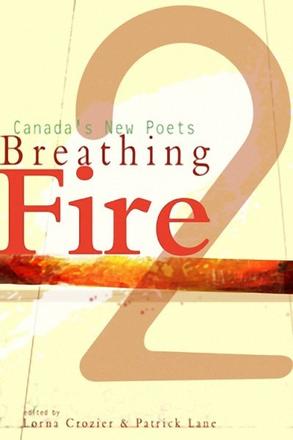 Nine years ago the first volume of Breathing Fire was published to rave reviews, introducing 31 of Canada's finest new poets to a wide and appreciative audience of readers. The ... Read more

Nine years ago the first volume of Breathing Fire was published to rave reviews, introducing 31 of Canada's finest new poets to a wide and appreciative audience of readers. The anthology has since gone into several printings and become a basic text in schools and universities across the country. And the poets within, including Michael Redhill, Karen Solie, Tim Bowling, Stephanie Bolster, Michael Crummey, Evelyn Lau, Sue Goyette and Carmine Starnino, have gone on to develop and captivate wide readerships of their own.

Today a new and exciting generation of poets has come of age. Some, including Tammy Armstrong, Adam Dickinson, George Murray, Alison Pick, Shane Rhodes, matt robinson, Laisha Rosnau and Nathalie Stephens, have already put out books, and have even won or been shortlisted for major awards. Others with work just as compelling will be introduced for the first time. Breathing Fire 2 collects the best from all 33 of these writers, proudly presenting the next generation of Canada's poets to the world.

Lorna Crozier has received numerous awards, including the Governor General’s Award, for her fifteen books of poetry, which include The Blue Hour of the Day, What the Living Won’t Let Go, Everything Arrives at the Light, and Inventing the Hawk. She is also the author of the memoir Small Beneath the Sky and the editor of several anthologies. She lives in Saanich, British Columbia.

Walk as far as you can,
then farther, past
the chain-link barring the road,
tire tracks deep as the rut of your mind,
the place you always get stuck.
Wanting more, or wanting
less, to be rid of the word
called wanting. Boulders,
tall grass, shrubs you can't name,
birds you can't name,
the ocean. Being a stranger sneaks you through
the latch of language - briefly. Bottles, you know.
Condoms, you know. And the weight
of being human where other humans have been.
Back of the sea like one line of thought,
slight variation of foam at the shore
where artifice gives itself up. Farther out,
a ledge in the rock
as though attention might help. Turning
for home, hands in your pockets, night mists in
like animal breath, the black-brown shapes
of gathering mammals
bending to drink at the silent pool
of mind submerged in the mind.
If a gap in awareness exists, it's there
you might have slipped through.
Falling (Matt Rader)

Clipped my skull on the lip of the bridge
as I plunged feet-first into the anxious river.
My teeth jawed together, all castanet
or clam-shell, crunched my tongue to pulp.
I couldn't talk, or scream, or lift a finger.
Couldn't remember why I was there or where
amongst all the falling my body had gone.
Rivulets of red ribboned my head like an insect-
painter's quick study of the wingless human--
The Faller--a gesture-drawing in blood and air.
Here's how I picture it: limbs all stutter and wheel
in the rioting wind, all seizure of sign-language
and panic-dance, eyes scrolled back, calculating
velocity by distance, the time left to swallow
or spit before impact. Never mind the fear
or embarrassment, I pissed my pants just for
the warmth in my crotch, that one last sloppy kiss.
Falling and falling is lonely business.
Plate No. 9 (Nathalie Stephens)

Together perhaps they are together in and out of the image one stopping at a distance from the other which would account for the absence of one the one woman who appeared later in the image before the artist who might not have noticed her presence but they both the women the two women both women are present from the beginning inside and outside of the frame the one that marks lines around the image the one this image in which two women standing and leaning one woman present the other not until later until the artist shuddered and the shudder marked by the fissured city imprinted on the image indicates the presence of two women together one woman and then another she the woman they the two women leaning and standing within reach of the artist and the need to readjust the line of vision the one that draws one woman to the other she both they the two women perhaps drawn one to the other and maybe outside of the frame they are lovers,

Crozier and Lane write their intro in celebration, excitement, and gratitude for the good poems they found. For that, and for all their time and attention, they deserve praise . .. [T]he book can give you hours of intense reading engagement and coax you to search for books you might have taken much longer to discover, or never discovered. A decade or two from now . .. Breathing Fire 2 is likely to be . .. a historical time-capsule.
--Brian Bartlett, The Malahat Review

In Breathing Fire 2 the latest collection of young Canadian poets from Lorna Crozier and Patrick Lane, we are given a glimpse of the literary world to come . .. There is urgency in their words, a cry to be heard . .. If poetry allows us to distill our experiences of the world into small snapshots of meaning and truth, then we will have to turn to these new writers -- inhabitants of this new world -- to translate it for us. We will be in good hands.
--Byrna Hallam, The Martlet

This writing is driven by an underlying, ineffable vitality, a legitimacy -- a sense that the words are locked inexorably in place and the poet knows it . .. There's much to like in Breathing Fire.
--Jon Mooallem, Books in Canada

Readers of the first edition of Breathing Fire, published nine years ago, will remember a formidable collection of young voices largely unknown to Canada's poetry scene. In Lorna Crozier and Patrick Lane's second introduction to "Canada's New Poets," the results are even more impressive.
--Shannon Cowan, Globe and Mail

Other titles by Lorna Crozier

Other titles by Patrick Lane