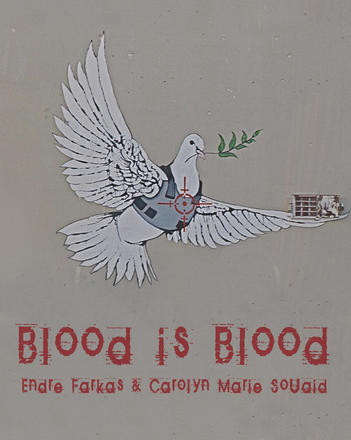 Blood is Blood is a collaborative book-length poem for two-voices, dealing with the bloodshed in the Middle East, a version of which was commissioned for CBC Radio in 2006. Souaid, of Christian Lebanese descent, and Farkas, the child of Jewish Holocaust survivors give this piece ... Read more

Blood is Blood is a collaborative book-length poem for two-voices, dealing with the bloodshed in the Middle East, a version of which was commissioned for CBC Radio in 2006. Souaid, of Christian Lebanese descent, and Farkas, the child of Jewish Holocaust survivors give this piece a special resonance. Blood is Blood,/i> is a powerful encounter between two poets, from diametrically-opposed backgrounds, whose cultural and personal lives intersect, clash and confront the truths and fictions that have become the destructive reality of Jews and Arabs trying to co-exist in the Middle East. Artistically, it is an innovative tapestry of images, sound and text that challenges viewers to confront their own attitudes about this volatile relationship and conflict in general. Although set in the troubled Middle East, its narrative speaks to tribal wars that have wreaked havoc around the globe: in Ireland, in the former Yugoslavia, in Russia, in Darfur, in Zimbabwe, and elsewhere.

The 15-minute video-poem included in the book is a powerful visual interpretation of the text.

Carolyn Marie Souaid is the author of seven poetry collections, most recently This World We Invented (Brick Books, 2015). She has performed at festivals and literary events in Europe, Canada and the U.S. and her work has been translated into French, Arabic, Spanish and Slovenian. Blood is Blood, a videopoem written and produced with Endre Farkas, won a top prize at the 2012 Zebra Poetry Film Festival in Berlin. She has been shortlisted for the A.M. Klein Prize and the Pat Lowther Memorial Award and is the recipient of numerous arts grants, including a residency at the Banff Centre in 2013.

“Endre Farkas and Carolyn Marie Souaid have prepared a DVD and book that remind us that Arabs and Jews are both Semites, and that, as in the Yin and Yang symbol, each zone of interacting black or white has a dot of the opposite colour at the heart of it. Farkas is a Hungarian immigrant, the child of Holocaust survivors. Souaid has Lebanese Arab ancestry – Christian rather than Muslim. Their work juxtaposes a series of statements by “Jew” with statements by “Arab,” printed on facing pages and exploiting parallelism and contrast. The best pair of statements contrasts the Jew’s ideas for whimsical Passover games (use marshmallows to simulate the Plague of Hail!) with a long list of Wartime Emergency Provisions by the Arab. The horror of stockpiling for war reminds us of the emergency that Passover commemorates: how deeply conflict is embedded in the Middle East. Vituperation and recriminations eventually give way to statements of love (treasonous though they might be, ideologically) and to a celebration of Arab and Jew sitting on their balconies and enjoying the same evening, something like the Biblical image of Everyman sitting under his own fig tree. The real impact of the work is in the “video-poem” on the DVD, which the reader should play before reading the book. Shot mostly in black and white by the talented videographer Martin Reisch, the film provides a backdrop of relevant images as the poets read the text. There is an informative website for the project at www. bloodisblood. com. The poem ends ambiguously with en face lines that say, “Let us take an eye for an eye till everyone is blind,” which is perhaps a variation on the saying attributed to Mahatma Gandhi, “an eye for an eye leaves everyone blind. ” Souaid and Farkas provide us with a grim reminder of vengeful elements in Mosaic and Sharia law, but they also imply that revenge might exhaust itself into tolerance, that survivors might become blind to differences. ”—Bert Almon,Montreal Review of Books