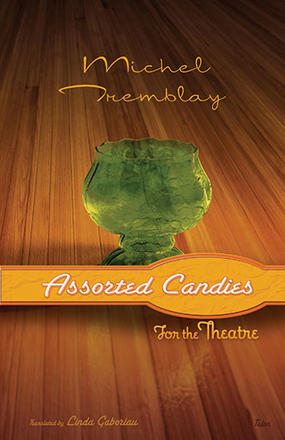 Assorted Candies for the Theatre

Assorted Candies for the Theatre

Assorted Candies for the Theatre is a stage adaptation of Michel Tremblay’s fourth book of autobiographical sketches, Bonbons Assortis / Assorted Candies, offering a rich and colourful cast of characters in this exquisite remembrance of childhood past in Montreal’s Plateau ... Read more

Assorted Candies for the Theatre is a stage adaptation of Michel Tremblay’s fourth book of autobiographical sketches, Bonbons Assortis / Assorted Candies, offering a rich and colourful cast of characters in this exquisite remembrance of childhood past in Montreal’s Plateau Mont-Royal neighbourhood. Much more than a mere adaptation of a prose memoir for the stage, in re-crafting his characters from the realm of thought and memory to the present action of the theatre, Tremblay generously reveals how it’s done. Here is the beginning of the narrator’s opening speech from the play:

Memory is a mirror that chooses what it wants to reflect. Memory is a mirror that distorts. And cheats. And lies. Memory can embellish things or make them ugly, it interprets as it sees fit and draws its own conclusions. And all too often our memory leads us down paths that our conscience would advise us to avoid, but those paths seem so promising and irresistible. Memory revives events that never happened and obliterates important facts, it emphasizes the most absurd trivia and chooses to forget essential details. In short, our memory fabricates a distorted image of the past, then imposes it as gospel truth when it’s really just a sketchy interpretation—but always more interesting, livelier and more vivid than reality. Memory is the mother of invention. And the big sister of imagination.