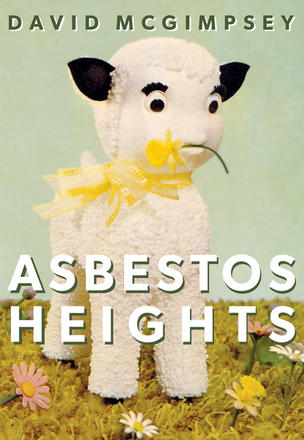 Winner of the 2015 Quebec Writers' Federation's A. M. Klein Prize for Poetry

If you tore off the tops of canola --
yellow canola flowers -- would you
jump in a tub of canola margarine
just to make the best of despair?

Implored by concerned readers to be 'classy' and 'real' for once, ... Read more

Winner of the 2015 Quebec Writers' Federation's A. M. Klein Prize for Poetry

If you tore off the tops of canola --
yellow canola flowers -- would you
jump in a tub of canola margarine
just to make the best of despair?

Implored by concerned readers to be 'classy' and 'real' for once, David McGimpsey has composed a sequence of canonical note ­books on all things 'poetic' and 'poetical. ' Birds! Flowers! History! Sad leaders! The word 'aubade'! They're all here, in a serial, State Fair-bound collection of lyrics set in the working ­-class belvedere of  Asbestos Heights.

Among the refreshing lemon- ­lime sodas of the world and the rousing lyrics to 'Bootylicious,'  Asbestos Heights  amps up McGimpsey's trademark sideswiping of formal rhetoric and prosody with pop savoir faire to ï¬?*nd his boldest collection. Imagine Petrarch in a Tweet war about where to buy a good pair of dad jeans. Imagine Yeats but with a lot fewer swans. Imagine a poet who was told long ago that nothing good ever comes out of a place like Asbestos Heights.

'David McGimpsey is unfuckwithable, poetry ­wise, and I'll stand on  John Ashbery's coffee table in my cowboy boots and say that. '
-- Michael Robbins

'McGimpsey’s book is a masterful display of formal unity . .. The work addresses the devalued currency of the overeducated, but underemployed, poet of art-culture, juxtaposing this experience with the esteemed currency of the undereducated, but overemployed, star of pop-culture . .. It is also a book of significant pathos and submerged emotion. '
– QWF A. M. Klein Poetry Prize jury citation

David McGimpsey is the author of five collections of poetry including Li'l Bastard which was named one of the 'books of the year' by both the Quill & Quire and the National Post and was shortlisted for Canada's Governor General's Award. He is also the author of the short fiction collection Certifiable and the award-winning critical study Imagining Baseball: America's Pastime and Popular Culture . Named by the CBC as one of the 'Top Ten English language poets in Canada,' his work was also the subject of the book of essays Population Me: Essays on David McGimpsey . He lives in Montréal.

In a review of David McGimpsey's Asbestos Heights, Klara Du Plessis notes of the Montreal writer's playful and unusual poetic subjects represented in formally tight quatrains, that "[u]sually, poetry is a boy’s club of erudite references. McGimpsey turns the tables, expanding poetic subject matter to the popular contemporary, but creating a new niche readership in the process. "

Other titles by David McGimpsey