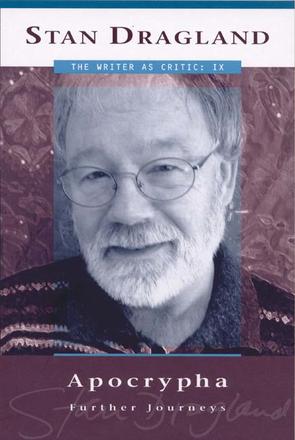 Apocrypha, a shaped collection of writing by Stan Dragland produced over two decades, is a passionate meditation on the meeting of life and literature, and a text of rumination, invention, and rhapsody. Dragland looks at the texts of strangers and colleagues, including Michael ... Read more

Apocrypha, a shaped collection of writing by Stan Dragland produced over two decades, is a passionate meditation on the meeting of life and literature, and a text of rumination, invention, and rhapsody. Dragland looks at the texts of strangers and colleagues, including Michael Ondaatje, Roy Kiyooka, Robert Kroetsch, Fred Wah, Matt Cohen, Agnes Walsh, and others, weaving together personal reminiscences with theoretical and critical looks at their work.