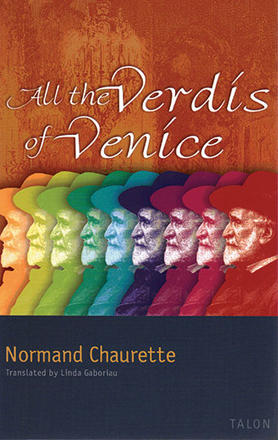 All the Verdis of Venice

All the Verdis of Venice

All great art has the ability to move people collectively, to create within it some essential, participatory expression of their humanity, their culture, their heritage. But who creates this art?

What is it that gives some individuals the power or the gift to create such works? ... Read more

All great art has the ability to move people collectively, to create within it some essential, participatory expression of their humanity, their culture, their heritage. But who creates this art?

What is it that gives some individuals the power or the gift to create such works? Who are these works written for? Does the composer have a particular muse, or are they inspired by an abstraction, a composite muse? Who owns this great art? Is it illegitimate for either the author, the muse, or the people to claim it as their own? Do they all have a moral right to its power, its imagination, its authenticity?

Can great artists be forced to create utilitarian works specifically designed for some great or even banal purpose, to forge a nation or to pay one’s creditors, or does such an exercise always and necessarily create an empty shell?

Can a lover of Verdi ever, in any sense, become Verdi? If so, what happens to the person they left behind, no matter how briefly? Who is the ?real? Verdi? Can he ever be found, and loved, by anyone?

Normand Chaurette addresses all of these questions in his farce on the most ritualized, contrived and yet the most powerful of all art forms: the opera. But his answers remain as ineffable as the questions that seek them. In the end, who we are?composer, performer, or audience?is a collaboration of our illusions on a stage from which we remain forever absent.