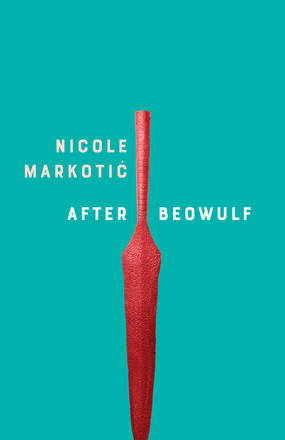 hwæt, another Beowulf translation? Not exactly…

hwæt, another Beowulf translation? Not exactly…

Welcome to Denmark’s Heorot Hall, where King Hrothgar invites to his banquet table everyone but Grendel, Saxon’s cradle-made monster. Dissing this ur-outsider initiates a predictable and monstrous backlash, a Mediæval fracas that only the eponymous Beowulf can quash. Sailing across the whaleroads, he arrives to “quell and queltch and quatch the Grendel beast. ”

Beowulf, that still-recognizable hero, embodies a “blank” function, a motive-driven yet motiveless megastar. He’s the young, fit, male, self-sacrificing protagonist-interloper who will fight any monster to protect his people. Or to defend strangers. Or to gain a reputation. Or because he just really wants to…

In her rendering of Beowulf, Nicole Markotić offers a rollicking cover song of a fantastical text. These pages will surprise readers as they introduce new ways to embrace, challenge, or click with Anglo-Saxon heroics. Writing original poems, Markotić de-stories the story of one man, who mostly does not play well with others, who fights monsters (and defeats their mothers, too), and who practically invents the poetic tradition of entitled bravery.

Upending the tale with her fresh and enchanting style, Markotić gives a nod to previous translations, winks at canonical critics, bares historical biases, all while gifting transmogrifying pages that will whet your whimsy!

"Nicole Markotić takes the original English-language epic and reprocesses it. That is, she rereads, rewrites, reimagines, rethinks, and retells it, all at the same time. The result is the story re-understood. The phrasing and incantation is Markotić’s own (and our era’s own), deployed with deliciously textured and diverse registers of language. Blake saw infinity in the palm of his hand. Markotić puts a millennium in yours. " —Wayde Compton, author of The Outer Harbour

"Beowulf, with its unfathomable monsters and monster-slaying hero, its bro world of mead, boasting, weapons, and booty, remains a stubbornly relevant template for much of our contemporary scene. Nicole Markotić’s After Beowulf handles all this with dazzling sprezzatura. It is a pleasure to follow the narrating, condensing, commenting voice as it sashays through a range of verbal registers from high Olsonic to comic book pratfall, snark to scholarship. After Beowulf provides an up-to-date reading of Beowulf through the eyes of a feminist poet. And it continually suggests what things might be like after Beowulf. " —Bob Perelman, author of Jack and Jill in Troy

"The collision of ancient and colloquial language creates bursts of humour as my dude Beowulf makes his way into the banquet hall and beyond. Linger here to experience the aesthetics of poetry in action: vibrant and intensely moving, we feel the wrenching pain of Grendel’s mother. Markotić’s language is thick with meaning and light with humour: a creation of the most projective of verses. " —Jacqueline Turner, author of Flourish

Nicole Markotic is a poet, novelist, and critic. Her poetry books include Bent at the Spine (BookThug), Minotaurs & Other Alphabets, and Connect the Dots (Wolsak & Wynn); her novels are Yellow Pages (Fitzhenry & Whiteside) and Scrapbook of My Years as a Zealot (Arsenal Pulp Press).

"Beowulf has been translated time and time again, whether by scholars just trying to be as accurate as possible, or people thinking outside of the box, or people who literally are just here for a good time like Nicole.  After Beowulf is the tale of Beowulf, but it does address why the Geats were so terrified of his death. Nicole just happens to tell it all in the funkiest, funniest way possible. It even had me reading it out loud at one point, trying to do funny voices and keep up with the flow. " –Caitlyn Vanorder, Bookmarks in Winston-Salem, North Carolina, for the The Southern Bookseller Review

"An irreverent romp and, paradoxically, a work of scholarship. "  –Barb Carey, The Toronto Star

"Reworking one of the earliest of epic poems through English and Danish traditions, there is a swagger to Markotić’s lyric, one propelled by both character and the language, writing a collage of sound and meaning, gymnastic in its application and collision. "  – rob mcclennan

Other titles by Nicole Markotic