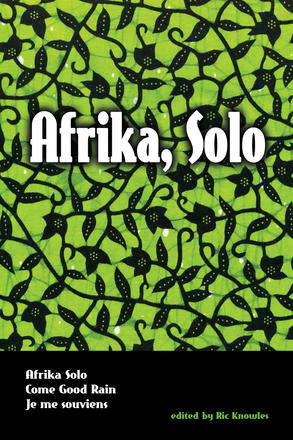 The plays in this anthology pit individual against community and cause readers to rethink the associations placed on skin colour, language, and assumptions regarding someone’s past. “Home away from home”; the road to Canada, for some, has meant an abrupt uprooting from ... Read more

The plays in this anthology pit individual against community and cause readers to rethink the associations placed on skin colour, language, and assumptions regarding someone’s past. “Home away from home”; the road to Canada, for some, has meant an abrupt uprooting from an African home. For others, a lineage of Canadian heritage does not equate with “belonging” through the eyes of their communities. Ric Knowles has compiled a collection of pieces from playwrights who explore where home, identity, and race commingle.

In Afrika Solo, Djanet Sears follows her roots back four hundred years to Africa to find a missing link. In a piece that changes time frames, sings, dances, and collides with pop-culture references, Sears explores home, heritage, and identity, in this fast-paced, potent play. A Canadian present, an African past; Sears finds herself in both.

In Come Good Rain, George Seremba brings us to Uganda in the 1970s and 80s to revisit a night where the eye of then-president, Milton Obote, turned its ferocious gaze on him. Come Good Rain is a candid portrait of Seremba’s experience; an incredible tale from the core of one of Uganda’s darkest moments.

A third-generation Canadian faces a crisis in belonging in Je me souviens. Divided by language, isolated due to her skin colour, and lost in the social and political margins, Lorena Gale’s play shows life through her eyes as she struggles to claim identity and belonging on her own terms. Written in part as a reaction to Jacques Parizeau’s remarks about “ethnics” following the 1995 Quebec referendum, Gale’s piece calls into question the rules of identity and place in Canada.