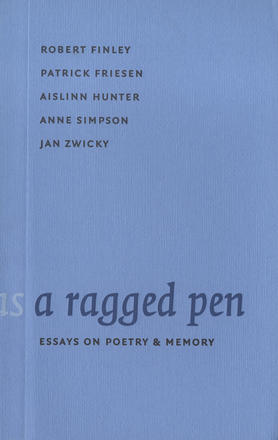 A Ragged Pen brings to the page five essays on memory. First delivered in Vancouver in the spring of 2005, these talksby Robert Finley, Patrick Friesen, Aislinn Hunter, Anne Simpson and Jan Zwickyexamine the narrative challenges, lyric energy and questions of verity that ... Read more

A Ragged Pen brings to the page five essays on memory. First delivered in Vancouver in the spring of 2005, these talksby Robert Finley, Patrick Friesen, Aislinn Hunter, Anne Simpson and Jan Zwickyexamine the narrative challenges, lyric energy and questions of verity that surround the subject of memory in a creative context.

Finley’s essay searches out appropriate, genuine voices for memories. Comparing photo narrative projects, his own and a friend’s, he proposes a form of storytelling that incorporates both memory and creation, a dialogue that speaks to, rather than for, the past. Within the discussion of narrative Zwicky posits a distinction between lyric and narrative treatments of memories, what each accepts about and tries to do with what memory delivers, and whether a difference in the degree of verity is part of this distinction. Hunter picks up the thread of verity and examines the discrepancy between seeing and imagining, the notion of “real” and the power of memory, drawing on the work of Borges, Seamus Heaney and recent science that calls into question commonly held perceptions of truth. Friesen begins with a childhood memory he suspects may be an invention, and opens onto the role of longing in memory and in poetry, challenging the assumption of past experience in longing, arguing for a note of loss in every new experience, a longing for what has never been. Simpson uses a myth of longing, that of Orpheus and Eurydice, to dig beneath metaphor, bringing new ideas and influences to the role of metaphor in social interactions and artistic endeavours.

Together these essays make fascinating crossovers and offer fresh insight on memory and art. A Ragged Pen is a valuable new contribution to the study of poetics and narrative philosophy.

Robert Finley is coordinator of Memorial University's Creative Writing Diploma Program where he teaches literature and creative nonfiction. His books, translations and collaborations include The Accidental Indies, A Ragged Pen, and K.L.Reich.

Patrick Friesen writes poetry, essays, drama, scripts, songs, and text for dance and music. The author of over a dozen books of poetry, Friesen has collaborated with various musicians, including Big Dave McLean, Cate Friesen, and Marilyn Lerner, and with choreographer-dancers Margie Gillis, Stephanie Ballard, and Ruth Cansfield. Friesen also teaches, part-time, as a sessional in the Writing Department at the University of Victoria. His most recent poetry book is jumping in the asylum (Quattro Books, 2011). Formerly of Winnipeg, Friesen now lives in Brentwood Bay on Vancouver Island.

Aislinn Hunter is a poet, essayist, and novelist. She is the author of six books, including the novel The World Before Us, which won the Ethel Wilson Prize. She lives in British Columbia.

Jan Zwicky has published nine collections of poetry, including Songs for Relinquishing the Earth, which won the Governor General’s Award, and, most recently, Forge. Her books of philosophy include Lyric Philosophy, Wisdom & Metaphor, and Alkibiades’ Love. Zwicky grew up on the prairies, was educated at the Universities of Calgary and Toronto, and currently lives on the west coast of Canada.

Other titles by Robert Finley

Other titles by Aislinn Hunter

Other titles by Jan Zwicky