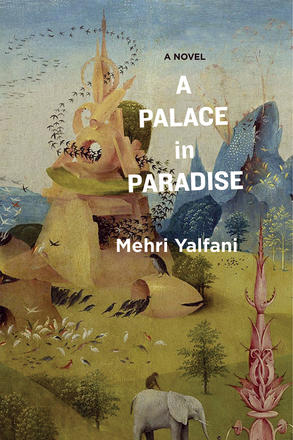 A Palace in Paradise is a novel about the complex Iranian refugee and immigrant community in Toronto and the way in which one woman's death changes the lives of many others. The people in this community are connected by family ties, cultural ties, romance, and the fact that, as immigrants, they not only share a culture, but they also share a past of political violence. Several were at one time imprisoned in Evin, a notorious jail in the Islamic Republic of Iran. Some were unable to withstand the daily torture and constant physical pain they were subjected to in Evin, and thus began to cooperate with the jail's authorities and participate in the torturing, even execution, of other prisoners. Many are incapable of having a normal life even after being released from the prison, and having immigrated to Canada to start a new life. Parvaneh, a social worker, accepts her friend, Ferdous, even though she may be a traitor. She is pitted against Nadereh, a refugee who learns that Ferdous was a traitor and feels duped. Guilt is a major theme in this book as characters deal with remorse from having caused the death of another by accident, or by not acting sooner, or by betrayal to the authorities. Life in exile is not easy and some succumb to their dark past with fatal consequences, while others struggle to forgive and find solace.

Mehri Yalfani was born in Hamadan, Iran. She graduated from the University of Tehran with a degree in electrical engineering and worked as an engineer for twenty years. She immigrated to Canada in 1987 with her family, and has been writing and publishing ever since. Four novels and two collections of short stories written in Farsi, her mother language, were published in Sweden, the U.S. and Canada. Her novel, Dancing In A Broken Mirror, published in Iran, was a finalist for the "Book of the Year" in 2000. She has published several books in English, including Parastoo: Stories and Poems (1995): Two Sisters (2000); and Afsaneh's Moon (2002). A Farsi version of Afsaneh's Moon was published in Iran in 2004. A volume of poetry in Farsi, Rahavard, was also published in 2004. Her short fiction has appeared in a number of American and Canadian anthologies. She lives and writes in Toronto.

"Mehri Yalfani's A Palace in Paradise fills an important gap in contemporary fiction, bringing the Irani-Canadian diaspora into critical focus through a predominantly female cast of characters--émigrés who seek in Toronto and its environs a space of refuge and forgetting, while discovering, among a community of exiles still shackled to the shadow of history, that it is only in those quiet acts of will, like those private acts of kindness, that we possess the power to set ourselves free. "
--Mariam Pirbhai, Professor, Wilfrid Laurier University, and award-winning author of Outside People and Other Stories

"A Palace in Paradise leaps off the page with its compelling storyline of human endurance. This deeply humane novel allows the reader an intimate glimpse into the world of Iranian immigrants and refugees in present-day Toronto, their hopes and fears, their strengths and weaknesses, their joys and despair, as each in his or her own way tries to cope with the upheaval of former lives and adjustment to new lives. The struggles of Parvaneh, an empathetic social worker, and her husband, Mahan, and their circle of friends and acquaintances, especially Ferdous and Nadereh, are magnified by backgrounds of anguish and guilt, as well as relationships made more complex by betrayal of husbands and lovers. Their task is to overcome the past and find a way to go forward into the future. That some do find a way to live and even find happiness is a credit to the human spirit. "
--Cecelia Frey, author of Lovers Fall Back to Earth and The Long White Sickness

Other titles by Mehri Yalfani