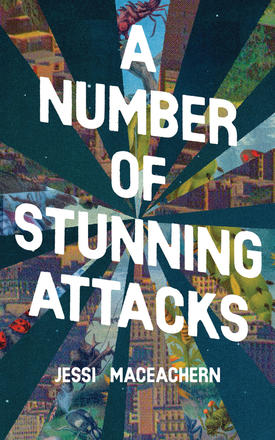 A Number of Stunning Attacks

A Number of Stunning Attacks

A Number of Stunning Attacks contributes to the ongoing association of fragmented forms and women’s writing, yet the insistent repetitions and crystallized imagery produce something ... Read more

A Number of Stunning Attacks contributes to the ongoing association of fragmented forms and women’s writing, yet the insistent repetitions and crystallized imagery produce something more coherent than a fragment and more dynamic than a single whole. Drawing on a line of innovative women’s poetics in Canada, these poems recall the radical experiments of Lisa Robertson, Erìn Moure, and Gail Scott. Intoxicated by disorientation, the reader will ask: Which city is this? Which woman is this? Which reader am I?

"Fans of Lisa Roberston and Erín Moure will find lots to love in these pages. "—Open Book

Jessi MacEachern lives in Montreal, QC, where she teaches English literature. Her research has been published in Studies in Canadian Literature/Etudes en litterature canadienne and CanLit Across Media: Unarchiving the Literary Event . Her poetry has been published in various places, including Poetry Is Dead, Vallum, MuseMedusa, Canthius, PRISM, and CV2 .

They are not naked but perfect

Eventual moonlight collides with the wall

Unspooled time combing the ground
Dailiness vanishing in the crush

"A long poem divided into six parts, A Number of Stunning Attacks plays with storytelling and style in intense, intimate imagery and stimulating abstract language. MacEachern is precise in her choice of words as they unfurl down the pages, surrounded by enough white space to let them move freely as needed – a delight with a greater purpose. "—Robyn Fadden, Montreal Review of Books

"There is an unstable, fragmentary eroticism to MacEachern’s debut collection of long poems. Reading, I am often stunned by images that glimmer with innuendo, but can’t be tracked down"—Klara du Plessis, 49th Shelf

"This is a sensual sensory journey and MacEachern writes with a rhythm that brings the reader into the felt-sense of her world, and holds us captive there in the stillness of her spaces. .. In MacEachern’s text, the spaces between words are as important as the words themselves. And this, I believe, is the point.  Attacks is worth reading a second time—once as introduction to a new environment and the second for the sake of wonder at her immersive World. "—Atlantic Books Today

“MacEachern’s poetry demands attention to the stunning beauty of her craft… MacEachern taps into what poetry does best, which is to bypass logical explanations and dive into an emotional core that here sings of strength above all. ”—Quill & Quire, starred review

"MacEachern's finely honed technique and emotional smarts are beautifully displayed as she uses intimacy to disorient and fragmentation to connect, bringing the reader's focus both inward and outward at once. Fans of Lisa Roberston and Erín Moure will find lots to love in these pages. "—Open Book

"Jessi MacEachern’s A Number of Stunning Attacks is an encounter of flesh and its edges. "—Arc Poetry Magazine

"In her amazing debut volume of poetry, Jessi MacEachern unfolds a panoply of encounters, some at points of intersection, others at moments of separation. They are uneasily situated in narratives, but who the subjects are is subject to interpretation. And to change. A Number of Stunning Attacks is tantamount to a broad set of disorientations and disturbances, often unsettling and always generative, for both the poet and the reader. We might think of this as a poetry of the romantic distance that always lies between two people, a poetry of lyric impossibility. The thrill and anguish of that impossibility has captivated us for thousands of years. It is as ancient as the poetry of Sappho and as contemporary as the work contained in this book—a record of the perennial quest to let love be heard and to make love known. "—Lyn Hejinian

"By turns drifting and twitchy, the fragments that comprise MacEachern’s evocative, invigorating first book lodge under the skin. Like splinters, or shards of brightly coloured glass, or bones that were always there but you didn’t recognize them until now. Sometimes they’re broken (sometimes we’re broken), sometimes they make something whole. "—Stephanie Bolster

"In Jessi MacEachern’s spellbinding (and spellblinding) debut, poems glint like slivers of glass but have the force of shrapnel. Shards of text, taut with significance, are read as if we are loosed in dream. MacEachern’s language recalls what Nicole Brossard says of “the re-invented language,” in which there is “a space for the existence of the woman subject and her desire… space for her singularity as well as her plurality. ” As one speaker puts it, “our hearts / Nose a line of light in the dust,” searching for meaning in a place only few have inhabited. MacEachern bends the light of words and shines directly into the Brossardian “espace inédit,” arresting the reader in language’s new, peculiar rays. "—Gillian Sze

"In these beautifully built up serial poems, Jessica MacEachern draws on the elongated language of a remoteness that is not caused by distance but by an obscured proximity. The depth of feeling created by that blockage is stretched into poetic events of dampened intensity that strain at the normal syntax of affect. This intensity – and its potential—is placed in the city, in differentiated and gendered bodies, in work, in the home, and in language. The hook of this book is that it creates the spaces in thought and perception that close distance. "—Jeff Derksen

"Jessi MacEachern’s first book of poetry strikes almost as a journal of the pronounced interiority all of us are living these days. A construction of sequences in which each passage on its own is a feast and lark, its poems unfold small mysteries that are dangerously calm, exploring intimate relations lived by women in the space of the house. In the rhythmic arborescence of precise lyric images, there are no totalities. Self-examining but never self-absorbed, MacEachern’s poems are saucy and savvy; via a female gaze onto gender and spacings, they pulse with uneasy but hard-won life. "—Erín Moure

"In her debut poetry collection Jessi MacEachern shows that for a woman to sing with lyric force is to try to express a thought before the inevitable interruption. How do women ever get anywhere? A Number of Stunning Attacks is itself a stunning attack: a winnowing of language as precise as it is gleaming. "—Sina Queyras