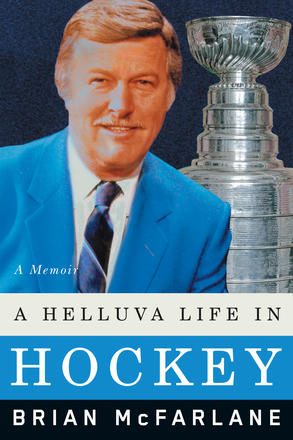 A Helluva Life in Hockey

A Helluva Life in Hockey

It’s been 85 years since Brian McFarlane first laced a pair of skates and tested the black ice on a tiny pond. And then he discovered the joy of hockey. Ultimately, there would be ... Read more

It’s been 85 years since Brian McFarlane first laced a pair of skates and tested the black ice on a tiny pond. And then he discovered the joy of hockey. Ultimately, there would be grade school hockey, high school hockey, junior hockey, college hockey, and, miraculously, two decades with the NHL Oldtimers anchoring his life. He was the rank amateur playing on a line with the Big M and Norm Ullman, facing off against icons like Gordie Howe and Ted Lindsay at Maple Leaf Gardens — even scoring a goal. He suited up at the Montreal Forum, elbow-to-elbow against John Ferguson, before thousands of fans. (There was even a stint with the Flying Fathers who ordained him a “Bishop” after a hat trick. ) Off the ice, in 1960, McFarlane was the first Canadian to be a commentator on CBS’s coverage of the NHL. He also survived 25 years of Hockey Night in Canada — despite confrontations with Punch Imlach, Harold Ballard, Bobby Hull, and Eddie Shack. Now, in this revealing autobiography, he remembers it all. For Brian McFarlane, it has been a helluva life in hockey.

When he was still going strong into his 80s I thought he should retire. His voice was going. The hockey world was no longer a “Rock and Sock ’em, society. It was changing and I’d heard his bosses at Sportnet were waiting to find an excuse to push Grapes aside. They’d dumped a number of high salaried guys and Grapes was in the million-a-year bracket. Then, on Nov. 12, 2019—Remembrance Day—he was gone.

Turfed after his “you people” rant on Coach’s Corner, gone for singling out new immigrants for not wearing poppies to honour Canada’s veterans and dead soldiers.

Ron MacLean, sitting next to him, didn’t catch the words “You people” or he might have asked Don to re-phrase his rant and say “Everybody” instead of “You people. ”

While the complaints started pouring in, MacLean nodded and gave his partner a thumbs up.

MacLean apologized the following day. Cherry did not. He said he meant every word he said.

Cherry was widely criticized but one finger pointer, coach Bill Peters of the Calgary Flames, soon regretted it. He approved of Grapes’ dismissal, and talked about hockey standing for diversity…

“I saw Cherry,” Peters said. “Our country is based on inclusion. We have a very diverse country. I know in the hockey community, we talk about hockey is for everybody. And that’s how we are in the country of Canada, too. ”

Hockey for everybody, Bill? Black players, too? Really?

A few days after Cherry was sidelined, so was Peters. And for a better reason.

Black player Akim Aliu says Peters used racial slurs while addressing the then 20-year-old rookie winger in the locker room of an AHL club a decade ago. It was Aliu’s turn to select the music for the room and Peters had had an earful.

Two of Aliu’s teammates on the AHL Rockford Icedogs, Simon Pepin and Peter MacArthur, corroborated Aliu’s accusations. Aliu said Peters never apologized for the incident, but instead doubled down in the coach’s office with another racial slur.

Peters essentially admitted that those allegations were true when he resigned as head coach of the Flames and apologized for “offensive language I used in a professional setting a decade ago. ” He said that the racial slurs he used were “made in a moment of frustration and do not reflect my personal values. ”

Maybe not. But Aliu had every right to out him, to expose his comments.

“Rarely does the title of a book so accurately reflect its contents. But Brian McFarlane’s A Helluva Life in Hockey is exactly what it says it is. From his days in junior, to sharing the ice with a 12-year-old Wayne Gretzky, to writing a hit pop song for Eddie Shack, it's all here. This memoir tells the story of a fascinating, one-of-a-kind life. ” — Tod Denault, author of The Greatest Game

Other titles by Brian McFarlane