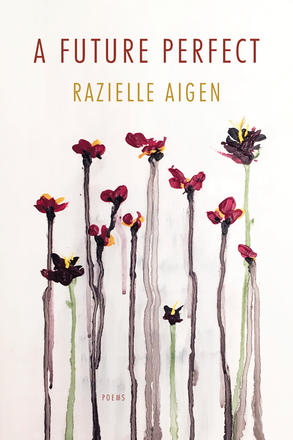 The constraint-based poems in this debut collection are written in the future-perfect tense, used as a way of bending time and playing with non-linearity. They challenge the “self” imagined as a unified monolith by pulling language apart, dissecting idioms and speech, then ... Read more

The constraint-based poems in this debut collection are written in the future-perfect tense, used as a way of bending time and playing with non-linearity. They challenge the “self” imagined as a unified monolith by pulling language apart, dissecting idioms and speech, then reassembling it in new and unconventional ways, using language as a medium not only for its literal sense, but also its auditory dimension. Cadence is another focus, as the ordering and pairing of slightly dissonant words creates moments of the uncanny, altering perceptions to push language beyond functional, ordinary usage. As we dismantle the linguistic binds that keep us stuck in traditional templates and labels, A Future Perfect moves us forward, freeing our inner landscapes, enabling us to dispense with the superfluous spokes of our world views, in an effort to continuously reinvent ourselves. Imagery of sky, landscape, organic hollows, biological crevices, architectural edifices, surfaces and topologies are used to evoke a kinaesthetic and tactile sense of space. Finally, calling on nature lends emotional and psychic valence, giving contour to the basic human drives of love and death – Eros and Thanatos – that propel these poems.

Razielle Aigen is the author of three chapbooks to date, and has published poems, essays, and interviews in both print and online publications across Canada, the United States, and the United Kingdom. She has been the recipient of a Research and Creation grant awarded by Canada Council for the Arts. Razielle holds a B.A. in Contemporary Studies and History from the University of King’s College-Dalhousie University, Halifax, Nova Scotia, and is currently pursuing an M.A. in Interdisciplinary Studies at New York University.

"It is as if Razielle Aigen awoke one morning to a new genre of poetry: She creates a lyric metaphysics of evanescent life, where metamorphoses are the norm and each aspect of being vibrates in connection to all others. In this new land, word, thought, and world find one another, lose one another, and meet again, surprised at being just here, just now. A book that is, itself, a cause for celebration. "
—Susie Linfield

"A Future Perfect takes us into the phenomenological world through a language that constantly shifts and reorders. Like a new genetic sequence, Aigen’s poems reinvent themselves as you read. This illuminating debut is an invitation to come up to the light of all that is within us. "
—Degan Davis

"I’m fascinated with the way the poems in A Future Perfect expand and contract, focusing simultaneously on the quarks and the cosmos of meaning, language, and purpose. The collisions Aigen facilitates are remarkable for their density and energy, working through and against space, time, and topology even prior to the first word. This is an enviable debut. "
—rob mclennan