Born in Coverntry, England, Steve Luxton lives in Montreal and also near Ayers Cliff in the rural eastern Townships of Quebec. He has taught and teaches at John Abbott College and Concordia University in the city. An original editor of both Matrix and The Moosehead Review, his first complete book of poems the hills that pass by was published in 1987, his second Iridium in 1993, and his third Luna Moth and Other Poems in 2004. In the Vision of Birds is his fourth complete collection. 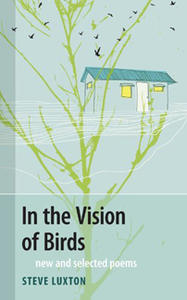 CoCoPoPro: Steve Luxton Dissolves the Barrier Between Man and Nature

Yesterday may have been Earth Day but today we're celebrating the environment with eco-poetry by Steve Luxton from his newest collection, In the Vision of Birds: New and Selected Poems (DC Books, 2012). Exploring the Eastern Townships region of Quebec, Luxton invites us to walk ... Read more