Born and raised in Edmonton, Myrna Kostash is the author of the classic All of Baba's Children, No Kidding: Inside the World of Teenage Girls, winner of the Alberta Culture and Writers' Guild of Alberta prize for Best Non-Fiction, and Prodigal Daughter: A Journey to Byzantium, which received the 2010 City of Edmonton Book Prize, the Writers' Guild of Alberta Wilfred Eggleston Award for Best Nonfiction, and was shortlisted for the 2011 Runcimann Award (UK). Her other titles include The Doomed Bridegroom: A Memoir, Bloodlines: A Journey into Eastern Europe, and her edited collections Reading the River: A Traveller's Companion to the North Saskatchewan River, The Frog Lake Reader, and The Seven Oaks Reader. Kostash, who served as Chair of The Writers' Union of Canada, has published widely in numerous magazines and lectured across Canada and Europe. In 2010, she was awarded the Writers Trust Matt Cohen Award for a Life of Writing. 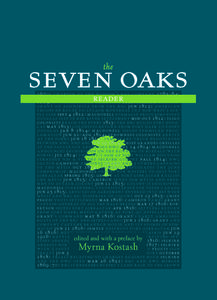 The 1816 Battle of Seven Oaks proved a clash of all things going on in pre-Confederation Canada – namely Indigenous land-rights versus settler claims and corporate greed (in the form of the Hudson's Bay Company versus the Northwest Company) – and would set the groundwork ... Read more