In a small city somewhere in an oil-rich Canadian province just east of the Rockies, a political scandal has erupted: an aging cabinet minister has struck and killed a member of his local constituency executive with his half-ton truck, ... Read more

In a small city somewhere in an oil-rich Canadian province just east of the Rockies, a political scandal has erupted: an aging cabinet minister has struck and killed a member of his local constituency executive with his half-ton truck, in broad daylight. But the premier suspects that there is more to this "accident" than meets the eye--and he wants to know the real reasons behind it before the media or his political rivals do.

Enter the premier's old friend Harry Asher--lawyer, former hockey star, self-styled intellectual, and recent divorcé--who is hired to dig into the incident. And it isn't long before Asher's investigation threatens to expose a chain of corruption that implicates many of the province's most powerful citizens--including the province's legendary now-senile premier--as well as its most cherished founding myths.

In Where the Bodies Lie, Mark Lisac (author of Alberta Politics Uncovered and The Klein Revolution) draws upon his decades of experience as a reporter at Alberta's provincial legislature to craft an absorbing debut novel--part political thriller, part fable--that opens up timeless themes of friendship, love, the inescapability of grief, the weight of history, and the nature of truth.

Asher looked down at the blond oak bench. It reminded him of the church pews he had sat in as a kid during church services, and later at funerals and weddings.

It was hard and noncommittal. The law was more alive. The law kept evolving. It was a tree of words with branches that grew, and bent in the wind. The bench sat there hard and unchanging year after year.

He looked at the prosecutor's black cloak. She was leafing through a binder, making sure she asked all her questions. Asher knew her to be conscientious and fun to talk to. She would be thinking of the Caribbean about this time of year but he was sure she had put the thoughts of a warm blue beach out of her mind as soon as she walked into the room with her meticulous background materials.

He glanced to his right and saw two women and a man whose worn department-store clothes set them apart from the young political staffers, reporters, and lawyers scattered around the public gallery. These three older people would be part of the regular spectator crowd, a small group of pensioners who showed up every day. For them, there was no such thing as a boring trial. They had decided real life delivered more blood-and-guts thrills than any courtroom show on television.

One of the women had a beehive hairdo, the first Asher had seen in years. Her hair was mostly white but there were traces of the blonde it had once been. The strong, flat structure of her face stood out with her hair pulled back. She had large, round glasses. She was smiling.

Asher thought this was what the knitters watching the guillotines during the French Revolution must have looked like. The only difference was the women knitting at the guillotines had real grievances worming around inside them. The court spectators felt only boredom -- so much boredom that they were willing to sit quietly through long stretches of meaningless, half-heard words in order to be present at the kill.

The other woman in the group glanced at him as if she had felt his stare. The glance became a full look. Her brown eyes shone like burnished chestnuts. Asher felt an attraction. So this is what it's come to, he thought. Now I'm interested in older women.

He looked up at Turlock in the witness box. The spectators' faces were still. Turlock's was immobile. He had dark eyes and a dark shadow of beard that could never be shaved close enough to lose its colour against his skin. Asher remembered those dark eyes had never spilled much emotion other than suspicion. Now they had no suspicion because Turlock knew who was playing what role and what was coming. He didn't need to calculate and prepare anymore. He simply needed to last out the insults.

The judge rotated his gaze constantly from the prosecutor, to Turlock and to the surface of the desk in front of him. He had once been the subject of rumours about a teenage girl he had represented when he'd been a defence lawyer. Now he had perfected the blank judicial mask so completely that it was difficult to believe he would ever feel or risk anything again.

Asher wondered if the judge would call a recess or if the prosecutor would ask for a break. They had heard plenty of evidence. Turlock's lawyer had heard enough to sink into a quizzical gloom, his chin resting on his right hand. Asher had heard nothing that interested him.

The prosecutor turned a page of her binder. Asher looked at her nondescript brown hair, cut to just above the shoulders of the cloak. He hadn't seen her face in at least thirty minutes. He had long been intrigued by the way her cute snub nose contrasted with her coarsened cheeks, which looked perpetually windburnt.

She began her next question and Asher felt his body suddenly hum into attention. He flicked his gaze back to Turlock.

Turlock kept still in his seat and tried to look matter-of-fact as he explained that yes, he had killed Apson and then explained why. But the leaden shadow on Turlock's face shifted slightly as his cheeks tightened and the dark eyes glittered and expanded just enough. Asher knew he had found what he needed.

Turlock said, "He had the brains of a gopher. That's what you do with gophers -- run 'em over with your truck."

Praise for Where the Bodies Lie:
"Where the Bodies Lie is brutal, stark, evocative, and dangerously honest - just like the land it's set in. Lisac's vivid novel manoeuvres the reader along back roads where truth lives and legends die."
~ Garry Ryan, author of the Detective Lane mysteries
"Mark Lisac has written a first class thriller with a sense of realism that will leave you breathless and looking over your shoulder. Rooted in a deep understanding of politics, friendship, ambition, and grief, Where the Bodies Lie has the immediacy of true crime. A great yarn, well spun."
~ Terry Fallis, author of Poles Apart and The Best Laid Plans
"What's remarkable about this novel is how brilliantly Lisac moves from political writing to fiction. His smooth prose and fine pacing make it a pleasure to read."
~ Margaret Cannon, The Globe and Mail
"Why you're going to love it: Intriguingly, Lisac has been writing about the politics of a certain oil-rich Canadian province just east of the Rockies since 1979. Parts of this novel are guaranteed to ring true."
~ Kerry Clare, 49th Shelf
"Lisac's backdrop may be the political scene, but his story is in the heart of his main characters, their flaws and aspirations. He is an elegant and efficient writer and sets lovely scenes and characters, creating a murder mystery with twists and engaging characters."
~ Samantha Power, Vue Weekly
"Where the Bodies Lie seems to carve its own genre. The mystery is always present, but...reads as a man living his life while peeling back hidden truths and unexplored layers of politics and friendships that are more complicated than they appear."
~ Jessica McIntosh, Fort McMurray Today
"A good read..."
~ Nick Martin, Winnipeg Free Press
"Political junkies will devour this book..."
~ Matthew Stepanic, Where Magazine
"...a must-read for political watchers in Alberta."
~ Dave Cournoyer 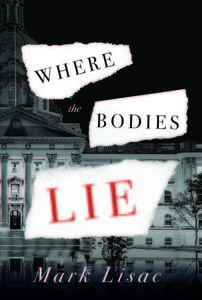 Other titles by Mark Lisac