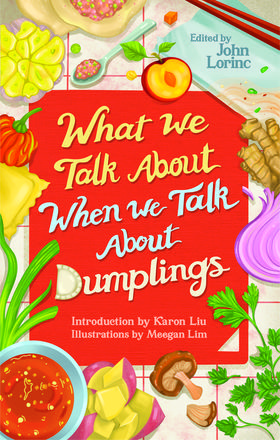 Featured on "The Sunday Magazine" on CBC Radio

Nearly every culture has a variation on the dumpling: histories, treatises, family legends, and recipes about the world’s favourite lump of carbs

Featured on "The Sunday Magazine" on CBC Radio

Nearly every culture has a variation on the dumpling: histories, treatises, family legends, and recipes about the world’s favourite lump of carbs

​​​​If the world's cuisines share one common food, it might be the dumpling, a dish that can be found on every continent and in every culinary tradition, from Asia to Central Europe to Latin America. Originally from China, they evolved into ravioli, samosas, momos, gyozas, tamales, pierogies, matzo balls, wontons, empanadas, potato chops, and many more.

In this unique anthology, food writers, journalists, culinary historians, and musicians share histories of their culture’s version of the dumpling, family dumpling lore, interesting encounters with these little delights, and even recipes to unwrap the magic of the world's favourite dish.

With an introduction by Karon Liu.

John Lorinc is a journalist and editor. He reports on urban affairs, politics, business, technology, and local history for a range of media, including the Globe and Mail, the Toronto Star, Walrus, Maclean’s, and Spacing, where he is senior editor. John is the author of three books, including The New City (Penguin, 2006) and Dream States: Smart Cities, Technology, and the Pursuit of Urban Utopias (Coach House Books, 2022), and has coedited four other anthologies for Coach House Books: The Ward (2015), Subdivided (2016), Any Other Way (2017), and The Ward Uncovered (2018). John is the recipient of the 2019/2020 Atkinson Fellowship in Public Policy. He lives in Toronto.

Karon Liu has been a staff food reporter for the Toronto Star since 2015 and aims to link food with culture, history, identity, politics – anything you can imagine. He's also an avid home cook, and his favourite utensil is a pair of wooden chopsticks his grandma used to use.

“Some essays are terrifically informative…But the most moving are deeply personal…With laughter, tears, and an occasional recipe that feels like part of an oral tradition, this collection speaks to the heart of all who grew up eating dumplings at their grandmother's table. ” – Heather Booth, Booklist

"Toronto journalist and urbanist John Lorinc collects stories, histories, family traditions (and even some recipes from food historians, chefs, and other prominent Canadians) about perhaps the most universal food phenomenon the world over: the dumpling!" – Andrew Woodrow-Butcher, Quill & Quire

"What We Talk About When We Talk About Dumplings is a collection of essays from journalists, food historians, and other writers for whom dumplings are a vessel for understanding global and personal histories that include a number of dumpling-related debates. " – Alexandra Trnka, Quill & Quire