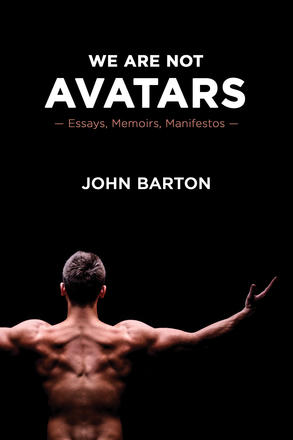 We Are Not Avatars

We Are Not Avatars

In We Are Not the Avatars, renowned poet and editor John Barton collects his most provocative essays, public lectures, and reviews produced over the past twenty-five years. Though Canadians still have some way to go, Barton began publishing in an era much less attentive to queer ... Read more

In We Are Not the Avatars, renowned poet and editor John Barton collects his most provocative essays, public lectures, and reviews produced over the past twenty-five years. Though Canadians still have some way to go, Barton began publishing in an era much less attentive to queer voices. In this special book, Barton grafts his own memoir about finding his voice as a poet and feet as an editor to astute takes on Margaret Avison, Emily Carr, Pat Lowther, Maureen Hynes, Anne Szumigalski, and many others. Making this book even more essential reading is the larger cultural context Barton brings to bear by writing about the historical production evolution and reception of queer writing in the lengthening shadow of equity.

John Barton has published nine previous collections of awardwinning poetry, six chapbooks, and two anthologies, including Hidden Structure; West of Darkness: Emily Carr, A Self-Portrait; Sweet Ellipsis; Seminal: The Anthology of Canada's Gay-Male Poets and Hymn. He has won three Archibald Lampman Awards, a Patricia Hackett, an Ottawa Book Award, a CBC Literary Award and a National Magazine Award. Born and raised in Alberta, he worked as a librarian and editor for five national museums in Ottawa, where he also co-edited Arc Poetry Magazine and Vernissage: The Magazine of the National Gallery of Canada. John Barton lives in Victoria, where he edits The Malahat Review. For the Boy with the Eyes of the Virgin is his tenth book.

from "Queer Rose Country"For queer people who were raised in or find themselves in places like the Alberta ofmy youth, the known environment is overshadowed by straight, mainstreamhegemony whose answer to the question "who am I?" is, by design, quite limited. Formany gay men and lesbians, whether they are writers or pipefitters or vodkadrinkers, "Where is here?" must be restated as "Where is queer?" or at least as itsderivative: "Where is straight-acting?"And we go looking for it. Eventually. Here or elsewhere. Elsewhere and here. I grew up in Charleswood, near the university in Calgary's northwest. TheRockies formed an early western limit to my thoughts, and Highway 1A remains myfavourite approach. It veers downhill past Cochrane toward Ghost Lake and JumpingPound, then swerves archetypically into my flesh. Even as a child I would believe Icould stand on my bed, gaze out the window--and there they'd be, waiting. Mountains: distant and sentinel, but patient and reassuring. Each spring their dustyindigo insouciance was echoed by the windblown slopes of prairie crocus in thefoothills. The mauve chrysalides would poke through slowly browning grasses, shyheads bowing as they opened. I believe our first landscape imprints the porous and visceral inside us,shapes the nervous system's involuntary responses. Words rise through the body,which is geologic, stratified--layers of place, of family, silted over by subsequentfutures. The oldest words, as they well up, conjoin with others more recent. Meanings blur. After I grew up and moved beyond the provincial borders of myimagination, Alberta--or rather my Alberta and everything that occurredthere--continued to assert itself, imposed its template on all later geographies. Myanswer is always physical. I am comfortable in cities like Calgary where the landoverwhelmingly intrudes. In Ottawa, the Gatineau Hills across the Ottawa River,which in itself was exotic, for it has breadth no river should have, reassured me,though in late September the feverish maroon haze incandescing over their flanks,as the maples turned, both disoriented and delighted me. Something inside linkedthis purpled fluorescence with spring. From "We Are Not Avatars: How the Universal Disembodies Us"Imagine of how differently we would read "First Year" if Eavan Boland were a man,the love's queerness signaled to us as readers the moment we encountered "yourboyhood," our experience of this poem taking us in an entirely different direction. The present debate about gay marriage could not fail to impinge upon the line,"Where is the soul of a marriage?," which would elicit an interpretation that noheterosexual reading of it need contemplate, especially in California, where Bolandteaches at Stanford. Because "First Year" is the eighth poem in an eleven-partsequence of love poems in her ironically titled collection, Against Love Poetry, itsplacement in relation to what precedes and follows it further determines howreaders will understand what's meant. Once they learn that this marriage was"solemnized" over thirty years ago, they would immediately know that no churchwould have agreed to host, let alone sanction a marriage between two men in the1970s; nor would it have been legal. The couple would have instead appropriatedthe idea of "marriage" for their own purposes, the poem reading as a testament ofthe forbearance of "forbidden love" to rise above societal prohibition, its resilienceequal to heterosexual love's putative stability. The celebrants attending thisunrecognized marriage of alike bodies and two minds might even tender itscandidacy to be declared universal--but only in a subcultural way, to echo Collins'definition--and, depending on each reader's capacity for tolerance, privately viewedwrong or right. The poem's decorous tone might nonetheless let it fly under theradar, much like the love poems in [my book] Great Men did, for not once are theshibboleths against sexual explicitness violated. There's nothing juicy in Boland'spoem no matter how you choose to read or misread it.

Other titles by John Barton