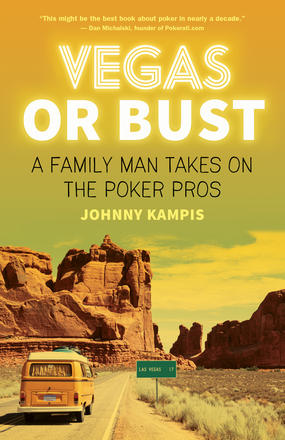 Can a former semi-pro win against the best poker players in the world?

In 2006, Johnny’s pie-in-the-sky dreams of becoming world champion were dashed when his kings ran into aces in the World Series of Poker Main Event. But lady luck was with him when he met Amy, the woman ... Read more

Can a former semi-pro win against the best poker players in the world?

In 2006, Johnny’s pie-in-the-sky dreams of becoming world champion were dashed when his kings ran into aces in the World Series of Poker Main Event. But lady luck was with him when he met Amy, the woman of his dreams, who soon became his wife.

Like many players, he drifted away from the game after Congress passed a law later that year that cut off funds to online poker and harkened the decline of the game. But even as Johnny returned to the working world, the itch remained.

A decade later, now with two small kids in tow, Johnny convinces Amy to take a six-week family trip from their home in rural Alabama to Las Vegas, where he will risk his $10,000 bankroll in hopes of playing in the Main Event again and winning millions. Along the way, he examines how the game has changed since 2006. Although the Unlawful Internet Gambling Enforcement Act was the beginning of the end of the poker boom, the game still thrives, and WSOP is Exhibit A. Johnny also muses on the outlandishness of the adult fairyland that is Vegas.

Johnny Kampis has been a journalist for 20 years, winning a dozen newspaper association awards. He has been published in The New York Times, Huffington Post, Time.com, and FoxNews.com. He’s been an avid poker player since the release of Rounders and lives in Cullman, Alabama, with his wife, Amy, and children, John Harper and Sarah Beth.

“An entertaining memoir . . . The most winning aspect of the book is Kampis’s new perspective, transformed from 2006’s lonely young poker fanatic to 2016’s family man who appreciates his good fortune in having another kind of full house. ” — Publishers Weekly

“Vegas or Bust is the most honest depiction ever written of what it takes to be successful in poker — while simultaneously being successful in life. The book is filled with tales of promise and caution and showcases celebrities, degenerates, crooks, and heros. There’s also plenty of interesting hands for the poker nerd to mull over. If the poker dream lives within you, Vegas or Bust is a must-read. ” — Jay Greenspan, author of Hunting Fish: A Cross-Country Search for America’s Worst Poker Player

“This might be the best book about poker in nearly a decade. A little more Hillbilly Elegy than Positively Fifth Street, Vegas or Bust tells the harrowing tale of a southern man struggling to maintain a proper work-life balance while pursuing the radical dream of raising a happy family and still being able to travel to Las Vegas for the WSOP . . . Johnny’s no big-time pro. But his adventures in poker from 2006 to 2016 traverse significant events that impacted millions who, at least briefly, got hooked on the game. ” — Dan Michalski, founder of Pokerati. com

“Kampis tells a new kind of poker story — that of the grown-up family man taking a shot at the Granddaddy of them all, the World Series of Poker Main Event. Full of heart and humility, this isn’t a Positively Fifth Street noir-ish tale of murder and millions, but an honest look at the post-boom poker world through the eyes of a family man that understands that his real bankroll isn’t tied to his tournament winnings. A winner of a tale, told from the perspective of an Everyman of Poker. Kampis hit the jackpot with this story of love, hope, life, and poker. ” — John Hartness, author of the Quincy Harker novels