Valley of the Rats

Valley of the Rats

Book nerd Krish hates the outdoors, and camping. But especially germs. When Krish and his father, Kabir, take a camping trip to Ladakh, he convinces himself that they will bond, despite their differences.

When they’re lost in a bamboo forest, teeming with black rats, and germs, ... Read more

Book nerd Krish hates the outdoors, and camping. But especially germs. When Krish and his father, Kabir, take a camping trip to Ladakh, he convinces himself that they will bond, despite their differences.

When they’re lost in a bamboo forest, teeming with black rats, and germs, Krish is at an all-time low. His GF (gut feel) and a couple of rats lead them to a hidden village, Imdur, unmarked on any map.

Krish and his father are allowed to stay, only if they follow rules. But Krish soon realizes the village has an odd custom of worshipping rats. They also have a secret. And so does his dad. Turns out, Krish has a secret too.

When all the secrets explode into the open, Krish and Kabir are in grave danger. Can Krish overcome his fears and phobias to take the chance offered to him? Or are he and his dad doomed to spend the rest of their lives among rats?

Mahtab Narsimhan is the author of a young adult trilogy, four middle-grade novels, and two picture books. Her first novel, The Third Eye, won the Silver Birch Award. Its sequels, The Silver Anklet and The Deadly Conch, have received critical acclaim, and Narsimhan’s standalone novel The Tiffin, was nominated for the Red Maple Fiction Award, the Manitoba Young Readers’ Choice Award and the SYRCA Snow Willow Award. A native of Mumbai (Bombay), Narsimhan now lives in British Columbia.

“Brimming with tension from the first page to the last, Valley of the Rats is filled mystery, heart, and horror. If you're looking for a book to make your skin crawl, look no further!”

“I have so many ‘F’ words to describe Valley of the Rats: ‘funny,’ ‘fantastic,’ ‘fabulous,’ and ‘flawless. ’ But the one you should use is ‘first book on your to-read list. ’”

“This story, with the main character's insecurities and favourite F-words, will amuse young readers. The information about rats will both horrify and fascinate readers as they watch how the relationship between Krish and his father changes when Krish learns to trust himself. ” Highly Recommended. 5/5 Stars

“A page turner … this book will appeal to middle-grade readers who enjoy suspense, adventure and a little magic realism. ”

“A good deal of action, a likable protagonist, and an ever growing sense of doom … A satisfying fantasy full of mystery. ”

“I couldn’t put it down as it felt like I was living the story and needed to know how it would end!” 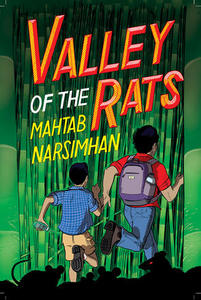 Breakfast is the most important meal of the day, and that's why we're bringing you today a unique egg recipe from the author of Valley of the Rats (Cormorant Books) – Mahtab Narsimhan.  Are you ready to eat scrambled eggs that go great with fried mushrooms, a slice ... Read more

Other titles by Mahtab Narsimhan