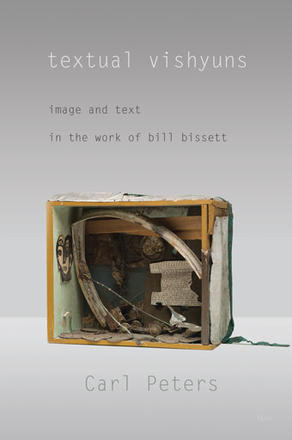 Although internationally recognized as a pioneer of visual, concrete, sound and performance poetry, few people recognize bill bissett’s work in the visual arts to be of equal aesthetic importance. While his drawings, paintings, collages and three-dimensional assemblages were ... Read more

Although internationally recognized as a pioneer of visual, concrete, sound and performance poetry, few people recognize bill bissett’s work in the visual arts to be of equal aesthetic importance. While his drawings, paintings, collages and three-dimensional assemblages were the subject of a 1984 Vancouver Art Gallery solo exhibition, Fires in th tempul, despite bissett’s substantial and ongoing contributions to the practice of the avant-garde tradition in art, very little critical work exists on his poetry, and almost no theoretical discourse exists on his visual work.

In textual vishyuns, Carl Peters attributes this to the fact that bissett’s entire body of work consists of an integrated aesthetic praxis of “the whole art”; that his drawings, paintings, collages and assemblages—challenge artistic conventions of visual language in the same way that his poetry challenges linguistic conventions of syntax and grammar to escape the strictures of Western modes of binary and hierarchical thought and perception.

With a focus on the technique of “the continuous line”; the related and carefully constructed ambiguity of the figure/ground relationship; and his technique of “molecular dissolve” to allow his subject and its environment to escape the frames and margins of representational art; Peters argues that in bissett’s artistic practice all things breathe because all things exist in the immediacy of the moment, which is, as well, ­spatial.

Drawing primarily from statements and manifestos of aesthetic ­theory by practitioners of the major modernist movements of impressionism, cubism, fauvism, surrealism and abstract expressionism in the visual arts; the poetics of Gertrude Stein, William Burroughs, Charles Olson and bpNichol; and the experimental films of Andy Warhol, Stan Brakhage, David Lynch and David Cronenberg, here, finally, is a book that locates bissett’s textual and visual artistic praxis within the larger context of the history, theory and practice of art.

“Carl Peters has written—nay produced!—an astonishing book on how bill bissett thinks within his art. Here is a discovery of poetic space and time coming together, where we glean time and space entering into empathy with the object. Peters’ learned awareness of the image’s relationship to bissett’s surreal vulnerability to surface and depth reveals the graphic touch of the voice and hand, whether on paper or canvas. In Peters’ eye and mind images are touched by voice to the letters on the page. We glimpse through film shots Magritte and Malevich-views that illuminate the intimate in the eye and ear of the beholder. This is an aesthetic right at home in its sensual perception of the uncanniness of these times. textual vishyuns is not only a book on bill bissett, but also a way of bringing modernist thought and vision together without taking either apart. ”
—Jerry Zaslove

“Carl Peters has pulled off a terrific critical irony for our neomodal time, the first scholarly study of bill bissett’s poems and pictures. His referentiality is wide and his blade is sharp. He is both argumentative and blissful. I’d say that bill is fortunate to have this knowledgeable attentiveness, and I’d guess that he would agree. ”
—George Bowering

Other titles by Carl Peters