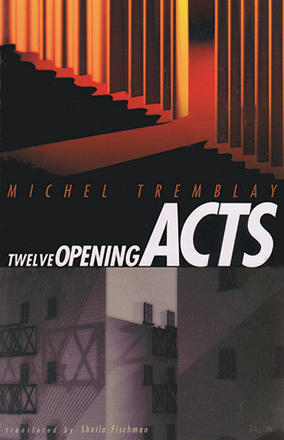 Alongside his dozens of fascinating and award-winning plays, and in addition to this great Chronicles of the Plateau Mont-Royal series of six epic novels, his translations, adaptations, librettos, and acute portrayals of human emotions in a state of both crisis and redemption, ... Read more

Alongside his dozens of fascinating and award-winning plays, and in addition to this great Chronicles of the Plateau Mont-Royal series of six epic novels, his translations, adaptations, librettos, and acute portrayals of human emotions in a state of both crisis and redemption, Michel Tremblay has left his readers with three magical keys to the secrets of his great literary achievements.

The first of these, Bambi and Me [Les Vues animés, Leméac, 1990], is a memoir of the movies that shaped his imagination as a child-those he watched in fascination and spent hours deconstructing with his mother, and those he watched on his own.

The second, Twelve Opening Acts [Douze Coups de Théâtre, Leméac, 1992], is an account of Tremblay’s discovery of the theatre as an adolescent: from his first breathtaking recognition of how the imagination is actually a public construct, while watching a performance of Babar the Elephant at the age of six; to his winning of the CBC drama competition with his first play, Le Train.

Between these parenthetical stories, Michel Tremblay offers the reader an entrance into his discovery of the theatricality of life itself-the personal dramas of his homosexuality, the death of his mother, the increasingly frail withdrawing of his father, even the completely unintentional, almost apolitical creation of his nationalist awareness-are recounted in narratives at once devoid of judgment, but at the same time ennobled with a complexity and intensity of passion operatic in its scope and merciless in its sweep.

This is the most ruthless and unsparing, yet tender and evocative insight Tremblay has ever offered into the creation of his literary genius.