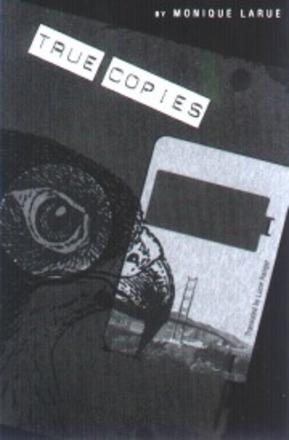 Winner of the 1990 Grand Prix du Livre de Montréal, True Copies is an evocative tale of love, loss and deception. Claire, a young Québecoise, has been asked to retrieve a computer disk containing essential details of a potentially lucrative translation program her husband ... Read more

Winner of the 1990 Grand Prix du Livre de Montréal, True Copies is an evocative tale of love, loss and deception. Claire, a young Québecoise, has been asked to retrieve a computer disk containing essential details of a potentially lucrative translation program her husband has been developing. When she discovers that the disk is missing from the research lab, she begins a quest that involves her in complicated intrigues, leading her through the Silicon Valley and into the streets of Dashiell Hammett's San Francisco.

Monique LaRue, a native Montrealer, has studied philosophy and literature. She has published two novels, short stories, literary criticism and reviews, as well as written for radio. She teaches at the CEGEP Edouard Montpetit and is the mother of three children.About the translatorLucie Ranger is a Montreal translator who has translated the works of numerous Quebecois authors in addition to Monique LaRue's Copies Conformes (True Copies).

The place where we're born insidiously leads us to death. The occasional need to leave our native city is probably just the manifestation of a keen sense of place. One that made me feel, now, that I loved the city of my childhood, the humble places where simple people knew nothing about doubt and travels. To live continually at the point of impact of two languages turns the mind into a kind of monochrome. I knew now that it was essential to sojourn in one of those golden cities where people live, speak and die without even an idea of the happiness inherent in living, speaking and dying in a powerful, unique language. Otherwise, we might forget that whatever the language, there are words that elude us all our life.

“True Copies is a suspense-filled mystery thriller, complete with a murder, obscure messages and lethal espionage in the computer industry. LaRue cleverly interweaves references to Dashiell Hammett's The Maltese Falcon into her story. The connection, of course, is highly appropriate, because in Hammett's novel the statuette of the Maltese falcon turns out to be a replica rather than the original. True Copies is an accomplished and engaging work of fiction which shares the social realism of Gabrielle Roy and Yves Beauchemin. ”—The Globe & Mail

Other titles by Monique LaRue