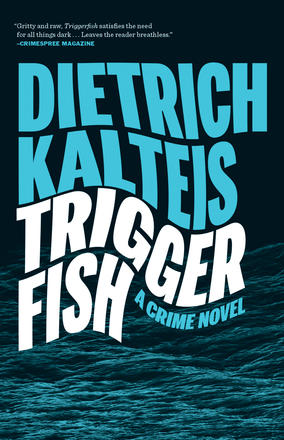 Rene Beckman is a dishonoured ex-cop with only two things on his mind: his new boat, the Triggerfish, and his hot date, an environmentalist named Vicki. When the two unknowingly dock the boat in the same ... Read more

Rene Beckman is a dishonoured ex-cop with only two things on his mind: his new boat, the Triggerfish, and his hot date, an environmentalist named Vicki. When the two unknowingly dock the boat in the same secluded cove as a Mexican cartel’s drug submarine, the date ends with a bang.

With the cartel’s coke-for-guns deal with local bikers torched by Beckman, he’s forced to go on the run with half the underworld chasing him through the streets of Vancouver and the waters surrounding it. While he tries to stay alive, a woman from Beckman’s past — currently on the run from CSIS and the anti-terror squad — comes back to settle an old score.

When the gangs start to go after his friends, the ex-cop stops running and turns the tables. With a ragtag crew of his own, Beckman faces the cartel and bikers head on. Fast, vicious, and thrilling, Triggerfish delivers a story where all the criminals are in conflict and no one is certain who will come out on top.

“If you like your crime hard and fast, Kalteis is for you.” — Globe and Mail

“The complicated but fast-moving conclusion is a total page-turner. Unsettling and sometimes horrifying, this high-octane tale will suit hardcore crime fans.”  –Publishers Weekly

“A textured noir thriller, Triggerfish is one hell of a ride.” — John Lansing, bestselling author

“To say [Triggerfish] is highly entertaining is an understatement. It’s badass. Straight up.” — Crime Syndicate Magazine

“In his third novel, this veteran Canadian author combines familiar ingredients — bitter ex-cop mixed up with drugs, guns, sex and bikers, amongst other embroiling elements — and creates his own unique recipe for escapist entertainment of the highest order, largely due to the intriguing nature of the narrative voice and the spectacularly scenic setting of Vancouver, as well as his own uniquely flavourful spicing, like a sexy animal rights activist.” — Digital Media Ghost blog

"Fast-paced, entertaining, engaging, funny in all the right places, educational (whoever knew the cartels smuggled drugs in purpose built-submarines? not me), satisfying. Ticks in every box." — Col’s Criminal Library