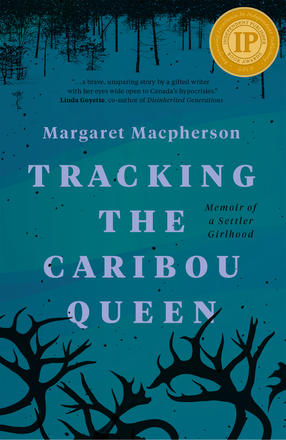 In this challenging memoir about her formative years in Yellowknife in the '60s and '70s, author Margaret Macpherson lays bare her own white privilege, her multitude of unexamined microaggressions, and how her childhood was shaped by the colonialism and systemic racism that ... Read more

In this challenging memoir about her formative years in Yellowknife in the '60s and '70s, author Margaret Macpherson lays bare her own white privilege, her multitude of unexamined microaggressions, and how her childhood was shaped by the colonialism and systemic racism that continues today. Macpherson's father, first a principal and later a federal government administrator, oversaw education in the NWT, including the high school Margaret attended with its attached hostel: a residential facility mostly housing Indigenous children.

Ringing with damning and painful truths, this bittersweet telling invites white readers to examine their own personal histories in order to begin to right relations with the Indigenous Peoples on whose land they live. Tracking the Caribou Queen is beautifully crafted to a purpose: poetic language and narrative threads dissect the trope that persisted through her girlhood, that of the Caribou Queen, a woman who seemed to embody extreme and contradictory stereotypes of Indigeneity. Here, Macpherson is not striving for a tidy ideal of "reconciliation"; what she is working towards is much messier, more complex and ambivalent and, ultimately, more equitable.

Raised in Yellowknife (now Denendeh) NWT, Margaret quickly got an education in the real world, traveling extensively in Europe, Australia, and Central America before settling into an English Lit undergraduate degree in the early 80's at the University of New Brunswick, Fredericton. Margaret wrote for periodicals and magazines (as well as being sole employee of a Halifax volunteer-run leftist bookstore) during her eight years in Atlantic Canada before venturing to Bermuda as a full-time reporter.

Returning to Canada in 1992, Margaret embarked on a Master of Fine Arts in Creative Writing from UBC and completed the program as a visiting grad student at Edmonton's U of A. She published a few contract non-fiction books as well as a biography of firebrand Nellie McClung called Voice for the Voiceless in the early 2000's but it was the publication of her short story collection Perilous Departures that launched her career. Her first novel Released followed in 2009 and in 2011 her second novel Body Trade won the DeBeers NorthWords Prize for Fiction.

Meanwhile, Margaret acted as a fiction editor of Other Voices literary journal, became a driving force in the Alberta Branch of the Canadian Authors Association and was elected the Alberta/NWT Rep for The Writer's Union of Canada.

Margaret formed an extraordinary network of creatives during two plus decades in Edmonton, living with her partner and three (occasionally four) children during her middle years she worked as a Writer-in-Residence for the Edmonton Public Library and mentored writers though the Writers Guild of Alberta.

She paints, travels, laughs long and often, and continues to explore and record the mystical communion of living things. Margaret has recently moved to Deep River in northern Ontario to begin her third act with her partner of countless wonderful years.

Tracking the Caribou Queen has been more than a decade in the making. Begun as a personal reconciliation project to more honestly understand the role race and privilege played in my foundational thinking, the work predictably morphed into a multi-layered examination of my past, my psyche, and the insidious ways systemic racism shaped my youth in Yellowknife, Northwest Territories, during the '60s and '70s. Tracking the Caribou Queen was painful to write.

The language in this text, offensive now, is the language of the times. For some, the material presented may trigger painful and unprocessed memories. It is not my intension to hurt or retraumatize any community of readers, but rather to reveal how my thinking about Indigeneity in those days was warped by stereotype, prejudice, and white privilege.

Uncomfortable as it was to face my own part in Canada's colonization of Indigenous Peoples, I believed that my way forward lay in telling my own experience as truthfully as I could. All of the events in this book are recounted in varying degrees of acuity and precision. In some instances, I have shaped chronology, geography, and identity to serve the story. I have changed names; melded the lives of two or more real people into one character; and altered gender, age, and even ethnicity to protect innocent people. My early life was intertwined with others, many of whom may be profoundly uncomfortable having their lives projected on these pages though the lens of a child, and later a teenager, sorting out her own issues of personal culpability. It is these people I endeavour to protect.

The book's adolescent love story is shaped by the intense longing of a lonely teenage girl. As such, I believe it is, at its heart, true.

Public figures, including my much beloved father, who spent the majority of his educational career in the Territories, have remained relatively unaltered. The attitudes of these men (and some women) were shaped by a different time and sensibility. My intention is neither to shame nor humiliate them, but rather to illuminate the systemic racism inherent in the settler experience and illustrate the trickle-down effect on subsequent generations based on entrenched ideas of paternalism, misogyny, and patriarchy.

I am, by no means, an expert on northern colonization, assimilation policy, or federal educational initiatives. Indeed, I would encourage white readers to further their own understanding of the impact of colonization by reading accounts from an Indigenous perspective.

This writing is drawn from my lived, individual experience. I feel compelled to own my whiteness--not good, not bad, just a fact--as much as I acknowledge and hold myself accountable for the missteps and mistakes that came from my generation and the generation before mine. My hope is that readers, be they Indigenous or settler, recognize aspects of their own lives in this work.

Colonizing people cannot begin to enable justice until we understand our place and agency in past injustices. In naming our participation, in owning the actions of the past, we can begin to take responsibility for our part in it. Only then can we make way for a right and equitable future as true Treaty People.

Praise for Tracking the Caribou Queen

"Macpherson uses a deft touch to write about the unintended racism she participated in as a child and teenager in Yellowknife, NWT. From sweetly touching to intensely honest, this memoir takes a hard look at the author's complicity in perpetuating stereotypes about Indigenous Peoples in Canada. "

- Rhonda Kronyk, contributor to In This Together and editor of Gather

"Margaret Macpherson's memoir invites us all to reckon with our own stories of white privilege, entitlement, and racism, so we may participate fully in undoing the paternalism, misogyny, and patriarchy that have shaped and benefitted all colonizing peoples. You will be deeply moved as you read Macpherson's disturbingly real, honest, raw, searingly sad, and finally hopeful story. "

"Indigenous readers will find no surprises in this careful indictment of Canadian racism. They've lived the experience. White readers will ask themselves three questions as they turn the pages of Margaret Macpherson's absorbing story. Did this happen in my hometown? Was I complicit? Can anything be done to repair the damage? Macpherson answers yes every time. "

"This is a brave, unsparing story by a gifted writer with her eyes wide open to Canada's hypocrisies. Can we find the courage to look at our own hometowns with Margaret Macpherson's unflinching gaze? She insists we try. "

Other titles by Margaret Macpherson