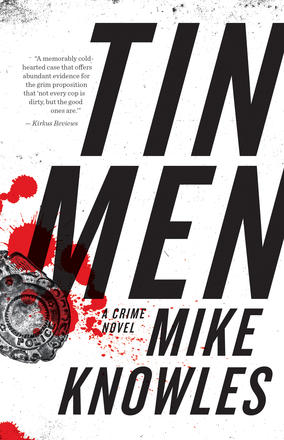 Woody was working on getting high when the phone rang. Dennis was on a date — it was a date he paid for, but a date all the same. Os had blood on his hands from a little extracurricular law enforcement. All three men picked ... Read more

Woody was working on getting high when the phone rang. Dennis was on a date — it was a date he paid for, but a date all the same. Os had blood on his hands from a little extracurricular law enforcement. All three men picked up their phones because they were cops, and cops are never really off-duty — not even when they’re crooked.

Detective Julie Owen was savagely killed in her own bed, and the unborn child she was carrying is nowhere to be found. The grisly crime has the brass breathing down the necks of the three detectives tasked with finding Julie’s killer. Woody, Dennis, and Os each shared a bond with Julie that went deeper than the blue of their uniforms and have their own reasons to want to find the person responsible for her murder. Secrets drive the investigation — secrets that need to stay buried long enough to solve the case.

“Knowles takes a break from Wilson, the hard-edged anti-hero from his past six novels, and proves he can write police just as well as he can criminals . . . overall the novel is a dark, effective story that should please fans of world-weary police procedurals such as Ed McBain’s classic 87th Precinct series. ” — Publishers Weekly

“A memorably coldhearted case that offers abundant evidence for the grim proposition that ‘not every cop is dirty, but the good ones are. ’” — Kirkus Reviews

“Knowles brings the same eye for detail in these new characters that has made the Wilson novels so popular, turning them from stereotypes into humanly flawed people. And the story is downright gripping, even when the darkness begins to feel overwhelming. Readers biding their time between novels by Dennis Lehane and Don Winslow should check out Knowles. ” — Booklist

“The story was fast-paced, the writing good . . . the mystery kept me engaged. ” — Uniquely Portable Magic

“Tin Men is storytelling on steroids . . . It is first rate mystery writing with an edge that will leave the reader wanting more. ” — The Bay Observer