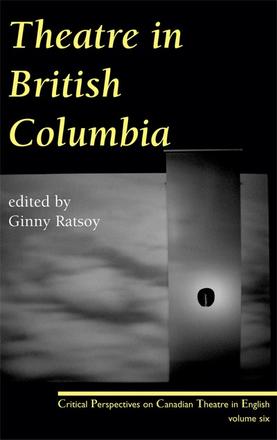 Critical Perspectives on Canadian Theatre in English sets out to make the best critical and scholarly work in the field readily available. The series publishes the work of scholars and critics who have traced the coming-into-prominence of a vibrant theatrical community in English ... Read more

Critical Perspectives on Canadian Theatre in English sets out to make the best critical and scholarly work in the field readily available. The series publishes the work of scholars and critics who have traced the coming-into-prominence of a vibrant theatrical community in English Canada.

Ginny Ratsoy is Professor Emerita at Thompson Rivers University. In addition to co-editing, with James Hoffman, Playing the Pacific Province: An Anthology of British Columbia Plays, 1967–2000 (Playwrights Canada Press, 2001), she has edited Theatre in British Columbia (Playwrights Canada Press, 2006) and the Professional Theatres issue of The Small Cities Imprint (2012). Her scholarly publications (co-authored, edited, and co-edited books and numerous peer-reviewed articles) have focused on Canadian fiction, theatre, small cities, third-age learning, and the scholarship of teaching and learning.

"The composite that emerges from the collage of the eighteen articles herein is, as I have indicated, off-centre and complex. It is also celebratory of off-centredness and complexity—of the edginess of the British Columbia play/playwright/theatre company. These articles acknowledge political, social, and performative borders and examine British Columbia theatre from perspectives which pay tribute to the flouting of arbitrarily imposed restrictions. " —from the introduction