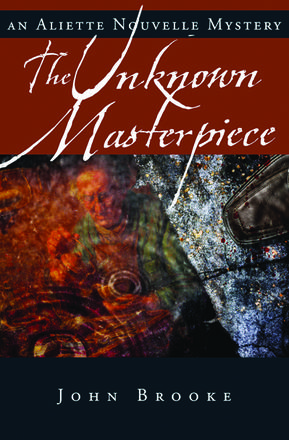 Inspector Aliette Nouvelle’s romantic relationship with Commissaire Claude Néon is faltering. This sad fact becomes a heavy distraction as she goes back and forth from France to Switzerland trying to determine who killed Martin Bettelman, a Basel art gallery security guard, ... Read more

Inspector Aliette Nouvelle’s romantic relationship with Commissaire Claude Néon is faltering. This sad fact becomes a heavy distraction as she goes back and forth from France to Switzerland trying to determine who killed Martin Bettelman, a Basel art gallery security guard, found at a gay gathering spot on the banks of the Rhine. A damaged painting of a shoemaker found near the body motivates the inspector more than the fact of murder. Aliette identifies with the image of a dedicated artisan working in solitude. With love dissolving, work is all that’s left. Aliette doesn’t know it as she starts out on the case, but her investigation is concurrent with an investigation into the murder of Justin Aebischer, a well-known Basel art restorer, in a small Swiss town outside of Basel. She sees an art fraud conspiracy at the source. But territorially minded Swiss police who ought to be allies are ineffectual and/or antagonistic to her ideas and moves.

“So: Our murder. Their painting.” “Seems so.” Claude hadn’t woken when she’d crawled in beside him the previous night. She’d hurried out before he’d got down to the kitchen that morning. But once at the office it was her duty to inform him of her movements on the new case. Alors: victim a French citizen employed in Basel as a security guard; gay or bisexual. She had feelers out concerning the club he frequented and possible links to a similar ‘art-related’ murder on the Swiss side, possibly the same day. Commissaire Néon said, “I really wish you wouldn’t do that.” He meant going to Basel unannounced and uninvited. He did not dare mention the late hour of her return – two? closer to three; he’d been fast asleep. Claude knew their relationship was hanging by a thread. Inspector Nouvelle did not respond to wishes. “I have to. Sometimes. You know that. I had a beer — very low key. To them I’m some friend from across the border who was going to meet him. They had no idea. Probably still don’t.” While the probable gay factor in Martin Bettelman’s violent death was noted