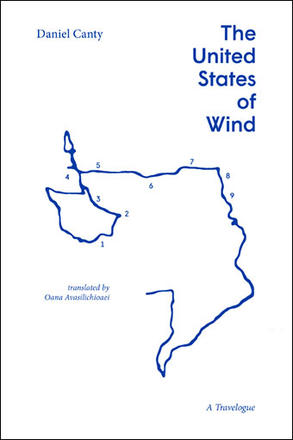 The United States of Wind

The United States of Wind

Late 2010. From the end of fall to the beginning of winter, Daniel Canty becomes a wind seeker. Aboard the Blue Rider, a venerable midnight-blue Ford Ranger crested with a weathervane and a retractable windsock, ... Read more

Late 2010. From the end of fall to the beginning of winter, Daniel Canty becomes a wind seeker. Aboard the Blue Rider, a venerable midnight-blue Ford Ranger crested with a weathervane and a retractable windsock, he surrenders himself to the fluidity of air currents. The adventure leads him and artist driver Patrick Beaulieu from the plains of the Midwest up to Chicago, the Windy City, into the wind tunnel linking the Great Lakes, through the cities of lost industry of the Rust Belt, only to veer off into Amish pastoralia, and to the forests of Pennsylvania, Civil War land, where fracking is stirring up the ghosts of the first oil rush.
Canty creates a gentle road book, a melancholy blue guide written in an airy, associative prose, where images coalesce and dissipate, carried away through the outer and inner American landscape. The book, mixing the tropes of road narrative, poetic fabulation, and philosophical memoir, reaches towards images on the horizon of memory, to find out where they come from, while coming to the foreordained realization that, wherever memory may lead us, its images will be long gone when we get there and most probably were never even there at all. The book’s through-line is about this emotional reality of images, the ways in which they take hold upon us and carry us back to the deep narrative of self. Clocking in at 160 pages, most readers don’t realize that the adventure spans only ten days, and that The United States of Wind is, in a very real way, a journey through a fold in time.
“I read this book as an essay, a method of thought. Canty doesn’t propose as much a theory of wind as a map of reflections on what emptiness holds, on what the imperceptible space between us occupies … The true object of this book’s love, or quest, is not a weather phenomenon, but rather something more akin to the American soul. ”
– Valérie Lefbvre-Faucher, Revue Liberté

“We accompany [Canty] on a wind-blown odyssey through the American mid-west … The United States of Wind presents Canty’s take on this elemental adventure, and a sense of his poetic perspective can be gained from [reading even the book’s subheadings] and from his vow – a kind of secular consecration – on the eve of their departure: ‘Trust the wind. Only it. Like we trust ourselves. ’ ”
– Geist

“Canty not only tells the story, but has a keen sense of observation: the similitudes between the cities visited, the people encountered at rest areas looking for places to stay or to eat, the ubiquity of sports and of televisions. Observation is never far from commentary, yet Canty’s total absence of prejudice against our southern neighbours allows for a tone of curiosity and intelligence which this narrative needed. ”
– Élizabeth Lord, Les Méconnus

“Between Cincinnati, Indianapolis, Chicago, Cleveland and Philadelphia, he records a whirlwind of reflections, sometimes profound, sometimes amusing, always insightful … A personal essay more than travelogue, The United States of Wind is an invaluable guide to the elusive essence of adventure. ”
– Martine Desjardins, L’actualité

Other titles by Daniel Canty