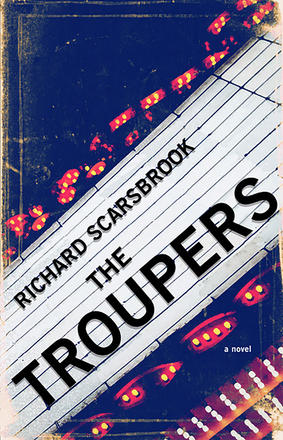 The Trouper-Royale Orpheum Galaxie Theatre is a jewel in the entertainment crown of Niagara Falls. At least, that’s what the marquee out front says. To the Fabulous Trouper Quintuplets their family’s old theatre is a thorn in the crown of their adolescent memories.

The Trouper-Royale Orpheum Galaxie Theatre is a jewel in the entertainment crown of Niagara Falls. At least, that’s what the marquee out front says. To the Fabulous Trouper Quintuplets their family’s old theatre is a thorn in the crown of their adolescent memories.

Under their famous-child-actor-turned-director father’s overbearing, and narcissistic eye, the quintuplets are raised on a strict diet of Golden Age entertainment and homeschooling to mold them into the best actors of their generation. But through a series of hilarious and tragic events, the siblings begin to develop their own personalities and ambitions, rebelling against their father’s aspirations for them. The tension rising from the quintuplets’ newfound individualism sparks an onstage brawl during a performance on their 18th birthday that changes the trajectory of all their lives.

Twenty years later, the quintuplets reunite for the reading of their father’s will and his demand for one last performance.

Richard Scarsbrook is the prize-winning author of Cheeseburger Subversive, Featherless Bipeds, Destiny's Telescope, and The Monkeyface Chronicles, which won the 2011 OLA White Pine Award. His books have also been shortlisted for the CLA Book of the Year Award, Stellar Book Prize, and ReLit Award. He lives in Toronto.

“In The Troupers, Richard Scarsbrook creates a family like few others. I mean, how many parents are blessed with five children born on the very same day? Each of the quintuplets has their own personality, quirks, and crosses to bear as they are moulded by their flawed father and family patriarch, the legendary actor, John Lionel Trouper. By turns hilarious and heart-rending, this brilliantly written tale is one wild ride that will stay with you long after the curtain falls. ”

“The Troupers is still a roller-coaster ride well worth taking, created by a fine wordsmith who has mastered his art. ”

“Humour set against a backdrop of sadness is the best way to describe the atmosphere of this story, but the constant presence of all five siblings . .. ensures there is always someone to rely on, or commiserate with. . .. I could have read another 100 pages about these Troupers. ”

“Combining the best elements of theatre, mystery and cinema, The Troupers will keep you engaged till the credits roll. ”

Other titles by Richard Scarsbrook