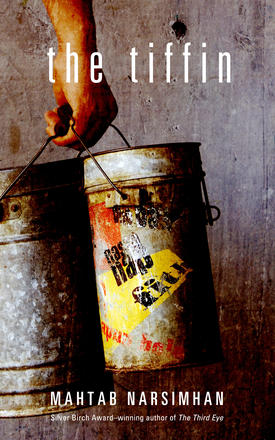 The dabbawallas of Mumbai deliver box lunches — called tiffins — to whitecollar workers all over the vast city. They are legendary for their near-perfect service: for every six million lunches sent, only one will fail to reach its intended destination. The Tiffin is about ... Read more

The dabbawallas of Mumbai deliver box lunches — called tiffins — to whitecollar workers all over the vast city. They are legendary for their near-perfect service: for every six million lunches sent, only one will fail to reach its intended destination. The Tiffin is about that one time in millions when a box goes astray, changing lives forever.

When a note placed in a tiffin is lost, a newborn — Kunal — is separated from his mother. Twelve years later, Kunal lives as a virtual slave under the thumb of his foster father, Seth. With danger and oppression making it impossible to stay where he is, Kunal asks his friend Vinayak, an aging dabbawalla, to help him find his birth mother. Vinayak introduces Kunal to the tiffin carriers, and a plan is hatched. Along the way, Kunal learns what it means to be part of a family.

Mahtab Narsimhan is the author of a young adult trilogy, four middle-grade novels, and two picture books. Her first novel, The Third Eye, won the Silver Birch Award. Its sequels, The Silver Anklet and The Deadly Conch, have received critical acclaim, and Narsimhan’s standalone novel The Tiffin, was nominated for the Red Maple Fiction Award, the Manitoba Young Readers’ Choice Award and the SYRCA Snow Willow Award. A native of Mumbai (Bombay), Narsimhan now lives in British Columbia.

“I really enjoyed travelling to Mumbai in this story, and experiencing the sights, smells, and sounds of this populous city … this is a unique survival story that will captivate junior and intermediate students. ”

“Narsimhan recounts a marvellous, well-told story about what it means to belong … When all is lost (or even just one tiffin!), Narsimhan demonstrates how hope can survive! Recommended. ”

“[The Tiffin] is a great book about social consciousness … because it can show you that just because someone lives halfway around the world doesn’t mean they’re not dealing with the same issues you’re dealing with. ”

“Melding the fantastically factual with fiction, Narsimhan sheds light on a relatively unknown part of Mumbai life while simultaneously creating a compelling quest that reads like a classic folk tale. Forgive the groan-inducing wordplay, but a novel this original is one in six million. ” Starred Review

Other titles by Mahtab Narsimhan