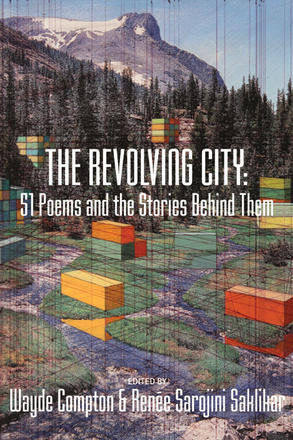 Finalist for the City of Vancouver Book AwardThe Revolving City: 51 Poems and the Stories Behind Them is a vibrant and diverse collection from a who's who of the west coast poetry scene. The poems assembled here range from the lyric to the experimental and address the theme ... Read more

Finalist for the City of Vancouver Book AwardThe Revolving City: 51 Poems and the Stories Behind Them is a vibrant and diverse collection from a who's who of the west coast poetry scene. The poems assembled here range from the lyric to the experimental and address the theme of disconnection in an urban environment from a variety of positions, concerns, and cultural perspectives. The collection also includes short reflections on the poems, written by the poets themselves, providing readers with an intimate insight into the inspiration and meaning behind the poems. The Revolving City anthology evolved out of the Lunch Poems reading series, a stimulating exchange of poetic ideas and cadence held the third Wednesday of every month in public space at Simon Fraser University's Vancouver campus. The Revolving City seeks to build community, extend poetry to new audiences, and reflect the rich diversity of the poetry scene both local and distant. Edited by much-lauded writer and director of the Writer's Studio, Wayde Compton, and award-winning poet Renée Sarojini Saklikar. Contributors:Jordan Abel, Joanne Arnott, Elizabeth Bachinsky, Dennis E. Bolen, George Bowering, Tim Bowling, Colin Browne, Stephen Collis, Wayde Compton, Peter Culley, Jen Currin, Phinder Dulai, Daniela Elza, Mercedes Eng, Maxine Gadd, Heidi Greco, Heather Haley, Ray Hsu, Aislinn Hunter, Mariner Janes, Reg Johanson, Wanda John-Kehewin, Rahat Kurd, Sonnet L'Abbé, Fiona Tinwei Lam, Evelyn Lau, Christine Leclerc, Donato Mancini, Daphne Marlatt, Susan McCaslin, Kim Minkus, Cecily Nicholson, Billeh Nickerson, Juliane Okot Bitek, Catherine Owen, Miranda Pearson, Meredith Quartermain, Jamie Reid, Rachel Rose, Renée Sarojini Saklikar, Jordan Scott, Sandy Shreve, George Stanley, Rob Taylor, Jacqueline Turner, Fred Wah, Betsy Warland, Calvin Wharton, Rita Wong, Changming Yuan, and Daniel Zomparelli. Praise for The Revolving City:"In these fiercely competitive and egotistical times, what a relief when established poets stand alongside and support emerging ones. The poems - passionate, com-passionate and critical at once, investigating, as Meredith Quartermain puts it, 'the physical, the historical, the cultural and the linguistic grounds' of the city - are deepened by each poet's reflection on their own work. Here are the cultural voices of Canada's today and tomorrow. Listen. You will be hearing more. " (Kate Braid, author of Turning Left to the Ladies and Rough Grounds Revisited)"Plato said poets are the people least likely to be able to say anything enlightening about the craft. He was a curmudgeon for thinking that, but not entirely wrong, because good poems derive less from the intellect than from the solar plexus, the bone marrow, or what Yeats called 'the rag-and-bone shop of the heart. ' It's so hard to write a good poem that poets leap at the chance to talk about what they were trying to achieve, or how it came to pass; and these ruminations are always more personal and often more engaging than the poems themselves. The Revolving City celebrates this wonderful dichotomy and, at times, blessedly defies it. " (Gary Geddes, author of What Does a House Want? and editor of 20th-Century Poetry and Poetics)"The Revolving City not only manages to emphasize the importance of breaking social divides, but it also reveals the inherently effective power poetry has in expressing issues of societal significance. " (The Ubyssey)

Wayde Compton is the author of two books of poetry, 49th Parallel Psalm (Dorothy Livesay Poetry Prize finalist) and Performance Bond. He also edited the anthology Bluesprint: Black British Columbian Literature and Orature. His non-fiction book After Canaan: Essays on Race, Writing, and Region was shortlisted for the City of Vancouver Book Award, and his first work of fiction, The Outer Harbour, won the City of Vancouver Book Award. His latest book is the YA graphic novel The Blue Road, illustrated by April dela Noche Milne. Wayde is the former director of the Writer's Studio and the Southbank Writer's Program at Simon Fraser University Continuing Studies. He currently teaches in the faculty of Creative Writing at Douglas College. He lives in Vancouver.

Renée Sarojini Saklikar’s ground-breaking poetry book about the bombing of Air India Flight 182, children of air india, won the Canadian Authors Association Prize for Poetry and was shortlisted for the Dorothy Livesay Poetry Prize. Her book Listening to the Bees, co-authored with Dr. Mark Winston, won the 2019 Gold Medal Independent Publishers Book Award (Environment/Ecology). Trained as a lawyer, Saklikar is an instructor at SFU and VCC. She was the first Poet Laureate for the City of Surrey (2015–2018) and was the 2017 UBC Okanagan Writer in Residence. Curator of the poetry series Lunch Poems at SFU and the Poetry Phone (1-833-POEMS-4-U), she has seen her work adapted for opera, visual art and dance. THOT J BAP is her sci-fi poetry epic, ten years in the making. 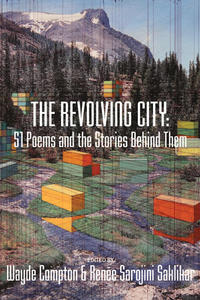 Other titles by Wayde Compton

Other titles by Renée Sarojini Saklikar