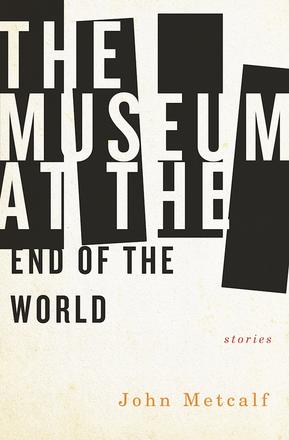 The Museum at the End of the World

The Museum at the End of the World

In this, his first book of fiction since Adult Entertainment, a New York Times Notable Book of 1990, legendary Canadian writer and editor John Metcalf is back—in full comic force—with a linked collection of stories and novellas. Set in Nashville, Memphis, New Orleans, and ... Read more

In this, his first book of fiction since Adult Entertainment, a New York Times Notable Book of 1990, legendary Canadian writer and editor John Metcalf is back—in full comic force—with a linked collection of stories and novellas. Set in Nashville, Memphis, New Orleans, and Ottawa, these tales span the life of writer Robert Forde and his wife Sheila. Playing with various forms of comedy throughout, Metcalf paints a portrait of 20th century literary life with levity, satire, and unsuspecting moments of emotional depth. Destined to be heralded as one of the most important books of the year, The Museum at the End of the World secures Metcalf's position among Canada's greatest literary figures.

John Metcalf has been one of the leading editors in Canada for more than five decades, editing more than 200 books over this time, including 18 volumes of the Best Canadian Stories series. He is also the author of more than a dozen works of fiction and nonfiction, including Vital Signs: Collected Novellas, An Aesthetic Underground: A Literary Memoir, Shut Up He Explained, The Canadian Short Story, and The Museum at the End of the World. Senior Fiction Editor at Biblioasis, he lives in Ottawa.

Praise for The Museum at the End of the World

"These four related fictions follow a British boy's coming-of-age and his older self enduring a world that rarely lives up to his standards... Brings to mind variously Wodehouse, Waugh, [and] Kingsley Amis? This is a book that could restore anyone's faith in the pleasure of reading."—Kirkus Reviews (starred)

"Metcalf is a gifted satirist and very, very funny...But [he] is much more than simply a jester, poking fun at the nonsensical world around him: he is —beneath all of the grumbling and gruff— a sentimentalist. For these stories have, at their core, a tenderness, a sadness, that is, at times, heart-rending."—The Toronto Star

"Metcalf's humour follows the tradition of Wodehouse, Waugh and Amis (Kingsley, not Martin)... it's never dull to read Metcalf. He is such a gifted stylist that you can just let yourself be taken by his sentences."—The National Post

"Metcalf is one of Canada's most heralded practitioners of the short story, and Museum assembles work...which revels enticingly in the texture of the English language. He excels at both the wondrous...and the grotesque"—Maclean's

"If you yearn for comedy worthy of Waugh, or Powell, or Wodehouse, relish his savage wit. If you suspect that our culture has easily forgotten and carelessly dismissed things of real value, let Metcalf remind you what they are. The Museum at the End of the World is a wise book written by a master of short fiction, a celebration of the painstaking, exhilarating business of making art."—Guy Vanderhaeghe

"Metcalf is best when he pokes bitchy fun at Canadian universities and the literary scene."—Winnipeg Free Press

"Metcalf draws Forde as an observer, a noticer of life, as a passionate stylist and devoted reader of his old heroes, and a great listener and absorber of the tales and lives recounted to him by others. But Forde's tragedy, perhaps, is that he lacks insight, in a way that Metcalf does not."—Hamilton Review of Books

Other titles by John Metcalf