The Lil'wat World of Charlie Mack

The Lil'wat World of Charlie Mack

Early in their ethnographic work, Randy Bouchard and Dorothy Kennedy were privileged to meet Charlie Mack. Born on the Mount Currie Reserve in 1899, he was a fascinating character and a font of wisdom, exemplifying by his way of life, his skills in trapping and canoe-making, ... Read more

Early in their ethnographic work, Randy Bouchard and Dorothy Kennedy were privileged to meet Charlie Mack. Born on the Mount Currie Reserve in 1899, he was a fascinating character and a font of wisdom, exemplifying by his way of life, his skills in trapping and canoe-making, and his knowledge of the history of his people, the living world of the Lil’wat, which the young ethnologists were able to record on tape and in their notes and photographs. Most important among what Charlie Mack gave them was a wide corpus of stories; he was a master storyteller, holding his listeners spellbound with his animated and dramatic delivery in both Lil’wat and English.

Charlie Mack’s stories were originally recorded in his native language as part of a systematic government-sponsored effort to create public awareness of the threatened indigenous languages of British Columbia and Washington State, and were eventually published as a highly popular translated and edited collection, Lillooet Stories (1977), by the British Columbia Archives.

More time spent with Charlie Mack before his death in 1990 revealed to Kennedy and Bouchard that his worldview embedded a moral code, information about the environment and the self-evident truths of his world not easily comprehended out of context: an interweaving of myth, history and experience invoked in daily conversation and deeply rooted in a sense of place. Now, two decades after Charlie Mack’s passing, the authors present a selection of his English renditions of some of these stories, drawing on their transcribed interviews, correspondence and ?eld notes to re-contextualize the narratives he wanted to share, and guide the reader to a more holistic understanding of this Lil’wat elder’s world.

This book is a tribute to a long friendship; the result of the authors reflecting on a lifetime of listening to a man who had something to say.

Born in Victoria in 1943, Randy Bouchard has undertaken ethnographic, linguistic, and ethnohistorical research with numerous First Nations throughout British Columbia. His work has been ongoing since 1968. Beginning in 1971 and continuing today, he has worked closely with socio-cultural anthropologist Dr. Dorothy Kennedy. In 1972 Bouchard and Kennedy founded the BC Indian Language Project, dedicated to the documentation and preservation of BC’s First Nations languages, cultures, and histories.

Kennedy and Bouchard’s comprehensive study of the Native people of the Desolation Sound area, Sliammon Life, Sliammon Lands, was published by Talonbooks in 1983. They are also co-editors of Indian Myths & Legends from the North Pacific Coast of America, published in 2002 by Talonbooks. Indian Myths & Legends is an acclaimed annotated translation of Franz Boas’ landmark anthropological study, Indianischen Sagen, which was originally published in 1895.

The Lil’wat World of Charlie Mack, published by Talonbooks in February 2010, is Kennedy and Bouchard’s tribute to one of their First Nations collaborators.

?[one of the] testaments to the increasing recognition of First Nations voices within Canadian society.?
? Canadian Literature

“[one of the] testaments to the increasing recognition of First Nations voices within Canadian society.”
– Canadian Literature 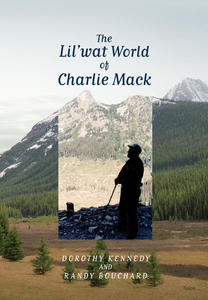 We couldn't think of a better book to exemplify what Forget-Me-Not is trying to do: in the "glory days" of the 2010 Vancouver Olympics, publisher Talonbooks released  The Lil'wat World of Charlie Mack, a collection of stories told by Lil'wat Elder Charlie Mack and a series ... Read more

Other titles by Dorothy Kennedy

Other titles by Randy Bouchard