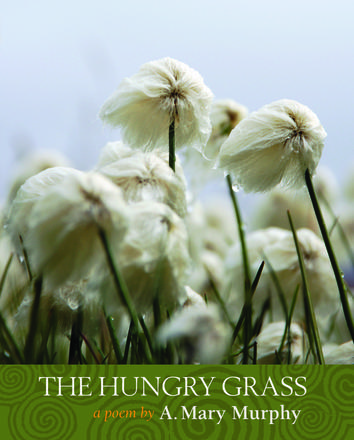 By A. Mary Murphy

This book tells a story that nobody knows because at the time the story happened, nobody cared. The individual lives of the labouring Irish were unrecorded, irrelevant. The Hungry Grass weaves the threads of daily routine, annual cycles, religious faith, fairy belief, communal ... Read more

This book tells a story that nobody knows because at the time the story happened, nobody cared. The individual lives of the labouring Irish were unrecorded, irrelevant. The Hungry Grass weaves the threads of daily routine, annual cycles, religious faith, fairy belief, communal practice, and political reality to show as clear a picture as possible of the very complex life among Irish tenant families in the nineteenth-century, culminating with An Gorta Mór--The Great Hunger. This volume is one continuous poem that unfolds over the course of fifteen years. It never falters in evoking its theme, or in being focused and concise, with impeccable word choices, and unfailing, echoing rhythm. When employed, the rhyming is subtle and musical. The shape of thought, which is a consistent seven-syllable line, is masterful in its execution of sound and sense. This is poetry that will show anyone who doubts it the continuing and necessary love of this craft, this art.

A. Mary Murphy is a lifelong writer whose doctoral work was in life writing. She teaches postsecondary classes in literature and film, leads travel study trips to Ireland, and has a freelance writing, editing, and mentoring business. While I was teaching creative writing in Winnipeg, my first book of poetry was published (Shattered Fanatics in 2007 from BuschekBooks). An edited version of my doctoral dissertation was published (Pierce: Six Prairie Lives in 2010 from Detselig). Her poetry has been published in numerous journals across Canada, the United States, France, Wales, New Zealand including the Antigonish Review, the Dalhousie Review, The Prairie Journal of Canadian Literature, Descant, Canadian Literature and Grain.

"Mary Murphy invokes the texture of the Irish countryside, its weather and seasons, the folk beliefs then governing Irish behavior, the previously cozy daily lives of the people, and with her detailed understanding of how the Irish lived off the sparse offerings of their countryside, she has re-created a world that before the famine, the Great Wind, and political heartlessness, was knitted together by love and generosity. By placing the great Irish disasters in context she has given me an understanding of Ireland I would not have had any other way. Her book brought that world to life, causing me to mourn its cruel destruction, and enriched in my memory what was before only dry, lifeless fact. She deserves much praise for this difficult and valuable accomplishment, and I thank her for it. "--Sharon Butala"And it is how it happened . .." So begins Mary Murphy's keening long poem, written in vernacular Irish-inflected English, which narrates fifteen years in the lives of her peasant ancestors in an unflinchingly steady and compassionate voice, a poem which brings its melodic, seven-syllable line like a needle to the torn cloth of history, weaving expertly back into being a rich and earthy tapestry of witness. Both a celebration of the turning wheel of the agricultural year and an elegy for a way of life both brutal and rich with folk belief, The Hungry Grass records the unwritten in a voice as precise and quietly authoritative as that of a bard, yet nevertheless bristles with a righteous anger. A poem to be cherished for its lyric beauty. "--Cathy Stonehouse, author of Grace Shiver"The Hungry Grass, A. Mary Murphy's book-length poem, sweeps the reader along in an evocative flow of deftly crafted images. Meticulously researched and deeply rooted in mysticism, faith, land and language, the book gives voice to one young Irish family's unstinting devotion and struggle to survive against a backdrop of forces beyond its control. "―Mary Lou Soutar-Hynes, author of Dark Water Songs and Travelling Light