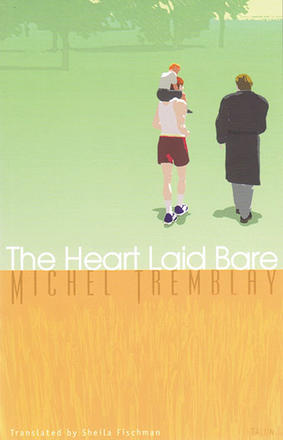 Talonbooks is pleased to announce a new edition of one of Michel Tremblay’s most unusual novels. First published in English translation by M&S in 1989 under the title The Heart Laid Bare [Le coeur découvert, Leméac, 1986], British and American rights to this novel were sold ... Read more

Talonbooks is pleased to announce a new edition of one of Michel Tremblay’s most unusual novels. First published in English translation by M&S in 1989 under the title The Heart Laid Bare [Le coeur découvert, Leméac, 1986], British and American rights to this novel were sold to Serpent’s Tail, who published this same book under a different title, Making Room, which is now out of print.

This new Talonbooks edition proudly restores this novel to its rightful place in Tremblay’s sweeping and compassionate imagination of human sensibility and passion.

Jean-Marc has fallen in love. The object of his affection is Mathieu, a young actor working as a salesman at Eaton’s while waiting for his big break. As a dowry to their new relationship, Mathieu brings Sébastien, his son. Jean-Marc, a fusty academic, is not sure about being able to make room in his life for this four-year-old boy.

While daring, for some even shocking when it first appeared in the 1980s, this story has, like Tremblay’s entire ouevre, stood the test of time and revealed itself to be a work of both enduring and prophetic vision

The Heart Laid Bare marks a significant departure for Michel Tremblay, because it is the first of his mature novels which is not set in the semi-autobiographical milieu of his childhood. Yet this thoroughly contemporary love story is told with all the warmth and empathy that is so characteristic of all of his other work.