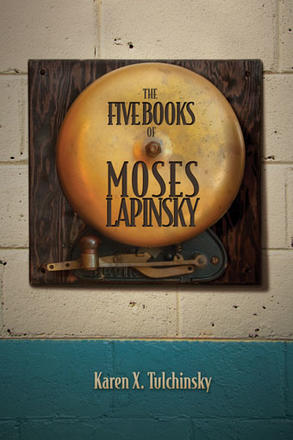 The Five Books of Moses Lapinsky

The Five Books of Moses Lapinsky

In 2003, a mild-mannered historian named Moses Lapinsky jots down notes for a biography. It is to tell the tale of his father Sonny, a famous Jewish- Canadian boxer. As Moses buries himself in his research, he is transported back in time to the pivotal events of his father’s ... Read more

In 2003, a mild-mannered historian named Moses Lapinsky jots down notes for a biography. It is to tell the tale of his father Sonny, a famous Jewish- Canadian boxer. As Moses buries himself in his research, he is transported back in time to the pivotal events of his father’s life. So begins the first of the five sections of the novel, each narrated by a different third person. Crammed with humour, sorrow, folly, bravery and the richness of the everyday, Tulchinsky traces the remarkable fortunes of generations of the Lapinsky family, bringing life to the character of an entire community.

August 1933: a sweltering Toronto night. At Christie Pits Park, during the ninth inning of an amateur-league softball game, four youths unfurl a white sheet emblazoned with a large black Swastika, lift their arms and shout, “Heil Hitler!” Within seconds, a group of Jewish youths charge in a struggle to capture the flag, setting off a four-hour race riot (the largest ever to occur, before or since, in Toronto), involving fifteen thousand people and injuring hundreds.

The riot at Christie Pits Park was the culmination of weeks of political and racial tension. Tulchinsky has re-created this and other defining historical moments in vivid detail, taking us inside the life of one immigrant Jewish family. We trace the fortunes of the Lapinskys—in particular the four sons—from the pivotal moment of the riots, through the years of the Great Depression, the rise of fascism and all its attendant social tensions, World War II, into the post-war era that began to emerge in the early 1950s. A stunning, engaging and moving fictional treatment of a defining moment for a family, a city, a nation and a continent struggling with ideas of freedom, tolerance and identity in a world broken by war.

Karen X. Tulchinsky
Karen X. Tulchinsky is the award-winning author of Love Ruins Everything (Press Gang Publishers), a novel which was named one of the top ten books of 1998 by the Bay Area Reporter; its sequel, Love and Other Ruins (Polestar); and In Her Nature (Women’s Press), a collection of short fiction which won the 1996 VanCity Book Prize. She has also written two feature-length screenplays and a short film, Straight in the Face, which debuted at the Toronto International Film Festival and was broadcast on Showcase TV.

Other titles by Karen X. Tulchinsky