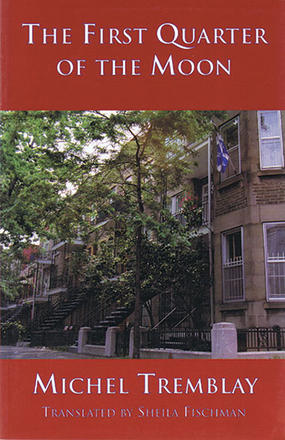 The First Quarter of the Moon

The First Quarter of the Moon

It is June 20, 1952, a decade after the events described in The Fat Woman Next Door Is Pregnant, the first volume of Michel Tremblay’s series of autobiographical fiction. The mystic, yet palpable instant of summer’s arrival is experienced simultaneously by the fat woman’s ... Read more

It is June 20, 1952, a decade after the events described in The Fat Woman Next Door Is Pregnant, the first volume of Michel Tremblay’s series of autobiographical fiction. The mystic, yet palpable instant of summer’s arrival is experienced simultaneously by the fat woman’s son (who is never named) and Marcel. These moving, profoundly different epiphanies of a transforming world, seen through the memories of the characters, set the stage for the action of the novel which takes place in the space of this single, evocative day. The fat woman’s son experiences this moment as an episode of profound personal objectification—he sees himself as in a photo of that larger, inclusive moment. Marcel, on the other hand, literally seizes the moment, and stores it in his school bag as a physical thing.

It is also the day of final exams at the École Saint-Stanislas where the fat woman’s son, a boy who lives inside the books he loves, is in the “gifted” class, and his cousin Marcel, the “mad” family terror, is in the class for “slow learners. ” Racked by envy at what he sees as Marcel’s genius—his ability to create and function in another dimension of reality—the gifted child blanks out during the French exam.

The first quarter of the moon—which rises over the final scenes of the novel in which the fat woman’s son recognizes and acknowledges his cousin Marcel’s genius—is an exquisitely crafted and resonant metaphor for the symbiotic relation between the imaginary and the real, the privileged “educated elite” and the “great unwashed,” innocence and experience, sanity and madness.