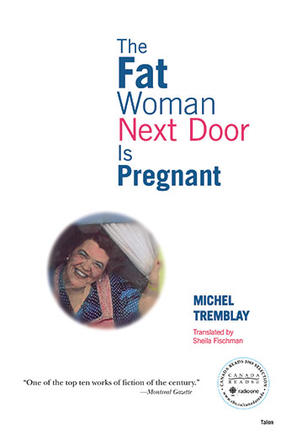 The Fat Woman Next Door Is Pregnant

The Fat Woman Next Door Is Pregnant

It is the glorious second day of May, 1942. The sun is drawing the damp from earth still heavy with the end of a long Quebec winter, the budding branches of the trees along rue Fabre and in Parc Lafontaine of the Plateau Mont Royal ache to release their leaves into the warm, ... Read more

It is the glorious second day of May, 1942. The sun is drawing the damp from earth still heavy with the end of a long Quebec winter, the budding branches of the trees along rue Fabre and in Parc Lafontaine of the Plateau Mont Royal ache to release their leaves into the warm, clear air heralding the approach of summer.

Seven women in this raucous Francophone working-class Montreal neighbourhood are pregnant—only one of them, “the fat woman,” is bearing a child of true love and affection. Next door to the home that is by times refuge, asylum, circus-arena, confessional and battleground to her extended family, with ancient roots in both rural Quebec and the primordial land of the Saskatchewan Cree, stands an immaculately kept but seemingly empty house where the fates, Rose, Mauve, Violet and their mother Florence, only ever fleetingly and uncertainly glimpsed by those in a state of emotional extremis, are knitting the booties of what will become the children of a whole new nation.

In this first of six novels that became his Chronicles of the Plateau Mont Royal, Tremblay allows his imagination free reign, fictionalizing the lives of his beloved characters, dramatized so brilliantly in his plays and remembered so poignantly in his memoirs. “The fat woman” both is and is not Michel Tremblay’s mother—her extended family and neighbours more than a symbol of a colonized people: abandoned and mocked by France; conquered and exploited by England; abused and terrorized by the Church; and forced into a war by Canada supporting the very powers that have crushed their spirit and twisted their souls since time immemorial. This is a “divine comedy” of the extraordinary triumphs and tragedies of ordinary people caught up by circumstances that span the range of the ridiculous to the sublime.

“At the end of Tremblay’s career one will likely be able to sew together all his plays and novels and discover that we have been privileged to read the works of a veritable Québécois Marcel Proust. ”
— Canadian Book Review Annual

“One of the top ten works of fiction of the century. ”
— Montreal Gazette

“The language of The Fat Woman Next Door Is Pregnant—it’s properly heard as a novel of voices—creates a neighbourhood tuned to the harmonies of pregnancy, to the awe of life about to be lived. There are some lovely, moving scenes. Tremblay is nothing if not eloquent, and he’s found a deft poetry to speak his tribute here. ” — Books in Canada