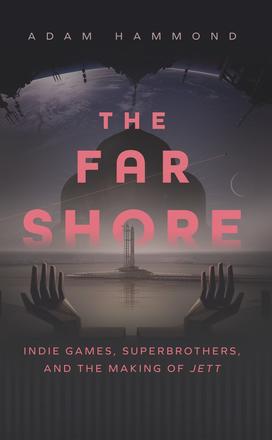 The genius and artistry behind Superbrothers and the making of an indie video game, from inception to its highly anticipated launch.

Superbrothers: Sword & Sworcery was released in 2011 at the forefront of an exciting era of “indie games” – with the aesthetic of punk rock ... Read more

The genius and artistry behind Superbrothers and the making of an indie video game, from inception to its highly anticipated launch.

Superbrothers: Sword & Sworcery was released in 2011 at the forefront of an exciting era of “indie games” – with the aesthetic of punk rock and the edge of modernist fiction, indie games pushed gaming into the realm of the avant-garde. Superbrothers (Craig D. Adams) was hailed as a visionary in the video game world.

Now, his long-awaited follow-up, JETT: The Far Shore, has been released for Sony PlayStation and Epic Games Store. In the decade from inception to launch, Adams brought author Adam Hammond along for the ride, allowing unprecedented insight into the complicated genesis of Jett.

The Far Shore offers a portrait of the enigmatic Adams and his team, the genius and artistry, the successes and setbacks, that went into building the world of JETT, in which you’re tasked with scouting a new home for a humanoid people after they’ve decimated their planet. To provide context, Hammond recounts the history of indie games and how their trajectory has followed that of independent art and literature. A riveting insider’s look at one of our most popular art forms.

Adam Hammond is the author of Literature in the Digital Age: A Critical Introduction (Cambridge University Press, 2016) and co-author of Modernism: Keywords (2014). His writing has appeared in The Walrus, The Literary Review of Canada, and The Globe and Mail, and his work has been profiled in Wired and on BBC and CBC radio. He is Associate Professor in the Department of English at the University of Toronto.

Other titles by Adam Hammond