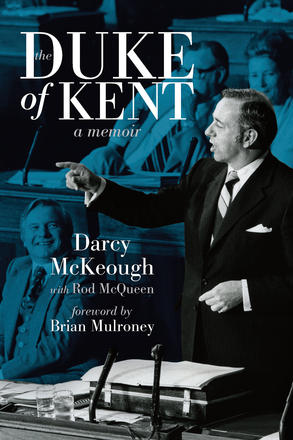 The Duke of Kent

By Darcy McKeough
With Rod McQueen
Foreword by Brian Mulroney

The Duke of Kent

A refreshingly honest memoir about politics and private life

Few Canadians have served their nation as well and as widely as the Honourable Darcy McKeough. He was elected Member of Provincial Parliament for Chatham–Kent, Ontario, five times between 1963 and 1977. In 1967 he ... Read more

A refreshingly honest memoir about politics and private life

Few Canadians have served their nation as well and as widely as the Honourable Darcy McKeough. He was elected Member of Provincial Parliament for Chatham–Kent, Ontario, five times between 1963 and 1977. In 1967 he was mockingly dubbed the Duke of Kent by an opposition MPP, a title he has worn as a badge of honour ever since. As Treasurer of Ontario, Minister of Municipal Affairs, and Minister of Energy during his time in office, McKeough fought to achieve budget surpluses long before it was fashionable, created regional governments that brought more efficient services to citizens, and attempted to tame Ontario Hydro.

In The Duke of Kent, McKeough takes readers behind the scenes and into the Cabinet rooms of government, putting on full display the thrust and parry of legislative sittings where he almost always gave better than he got. He brings to life the political and constitutional issues of the day as led, litigated, and legislated by an array of provincial and federal politicians, including Charles MacNaughton, John Robarts, William Davis, John Diefenbaker, Robert Stanfield, Lester B. Pearson, Pierre Trudeau, Joe Clark, Brian Mulroney, Jean Chrétien, Jacques Parizeau, and Peter Lougheed.

“A very endearing and rigorously honest memoir . . . There can be few lives more illustrative of all the best aspects of that serene, tranquil, and confident earlier era than Darcy McKeough and his family.” — Globe and Mail

Other titles by Rod McQueen