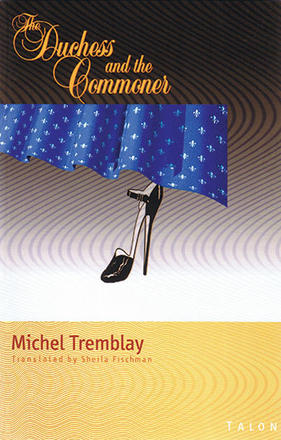 The Duchess and the Commoner

The Duchess and the Commoner

(This third volume in the Chronicles of the Plateau Mont-Royal—an epic series of novels which imagines the lives of the characters of Tremblay’s plays—deals with an explicitly gay thematic: Tremblay’s metaphor for the Québécois desire for a more glamorous identity ... Read more

(This third volume in the Chronicles of the Plateau Mont-Royal—an epic series of novels which imagines the lives of the characters of Tremblay’s plays—deals with an explicitly gay thematic: Tremblay’s metaphor for the Québécois desire for a more glamorous identity on the world stage. )

This is the third volume in Michel Tremblay’s six-volume Chronicles of the Plateau Mont Royal, an epic series of novels which imagines, in prose, the lives of the characters of Tremblay’s plays, in which each of them acts out their own personal drama: their loves, their disappointments, their travails, their agony and their ecstasy. It is in the novels, however, that these characters are seen in their context of time and space: the neighbourhood in which Tremblay and his extended family lived and grew up.

The Duchess and the Commoner focuses on Albertine’s brother, Édouard, brother-in-law to ‘the fat woman’ and uncle to Marcel, and to the ‘fat woman’s’ son. In ths volume, Édouard launches his forays into the 1940’s world of Montréal show-business and creates his own astonishing role within it. As with all the novels in this series, a certain sense of wonder, even magic, emanates from the grandmother, Victoire, which in this episode is seen flowing through Édouard to his nephew, the brilliant and disturbed Marcel.