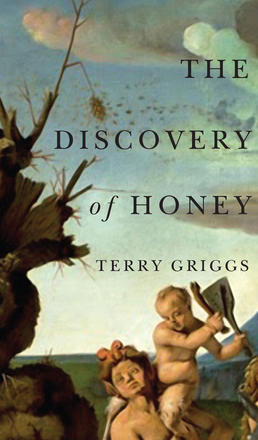 The Discovery of Honey

The Discovery of Honey

Hero, the hyper-precocious and nosily omniscient narrator of Terry Griggs's riotous new book, The Discovery of Honey, is not one to hide her light under a bushel, nor to conceal significant, usually scandalous, happenings in her rural hometown, including her own conception, ... Read more

Hero, the hyper-precocious and nosily omniscient narrator of Terry Griggs's riotous new book, The Discovery of Honey, is not one to hide her light under a bushel, nor to conceal significant, usually scandalous, happenings in her rural hometown, including her own conception, birth, and various other unruly incidents that occur throughout her young life.

Running wild even before she can walk, Hero goes on a dangerous road trip with an aunt, later takes up with her feral, bad-boy cousin, investigates a crime, kills a best friendship with a few aggressively-applied home truths, falls in conflicted love with the cousin, then determinedly, if unconvincingly, falls out.

A backwater bildungsroman—"dung" definitely included, as Hero is forthright dishing the dirt—The Discovery of Honey confirms Griggs as one of the most uproarious and confoundingly original writers at work today. It's funny business all around.

Terry Griggs is the author of Quickening, which was nominated for a Governor General’s Award, The Lusty Man, and Thought You Were Dead. Her popular children’s novels include the Cat’s Eye Corner series, and, most recently, Nieve (Biblioasis). In 2003, Terry Griggs was awarded the Marian Engel Award in recognition of a distinguished body of work, and in 2010 honoured with the installation of a Project Bookmark Canada plaque in Owen Sound. Her latest book is the short fiction collection, The Discovery of Honey (Biblioasis, 2017). She lives in Stratford, Ontario.

PRAISE FOR THE DISCOVERY OF HONEY

“For me it was another case of love at first line and I knew in an instant I wouldn’t be putting the book down until I’d finished it.” —James Crossley, Mercer Island Books

“Griggs loves words in a way that can be contagious to the reader.”—National Post

“The language, the verbal fireworks, the apparently limitless stream of image and metaphor—startling, heady, hilarious—do it all.”—The Globe and Mail

“When her poetic sensibility is joined to a narrative that is both wildly comic and poignant in mood, which happens often in her stories, the results are superb.”—Toronto Star

“Terry Griggs [has] made her mark as an original and arresting writer with a potential to be consistently inventive and brilliant.”—Jury for the Marian Engel Award

“She's a wildly inventive storyteller, gifted with a superb turn of phrase.”—Montreal Gazette

Other titles by Terry Griggs