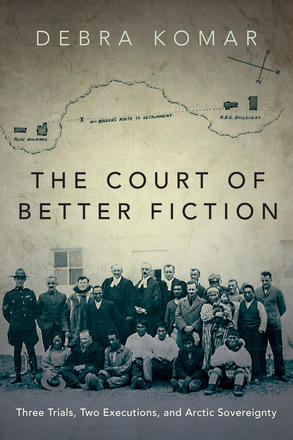 The Court of Better Fiction

The Court of Better Fiction

In 1921, the RCMP arrested two Inuit males suspected of killing their uncle. While in custody, one of the accused allegedly ... Read more

In 1921, the RCMP arrested two Inuit males suspected of killing their uncle. While in custody, one of the accused allegedly killed a police officer and a Hudson's Bay Company trader.

The Canadian government hastily established an unprecedented court in the Arctic, but the trial quickly became a master class in judicial error. The verdicts were decided in Ottawa weeks before the court convened. Authorities were so certain of convictions, the executioner and gallows were sent north before the trial began. In order to win, the Crown broke many of its own laws.

The precedent established Canada’s legal relationship with the Inuit, who would spend the next seventy-seven years fighting to regain their autonomy and Indigenous rule of law.

On December 6, 1921, Royal Canadian Mounted Police Corporal William Doak arrested a young Inuit male named Alikomiak a few miles inland from the northeast coast of the Northwest Territories. Alikomiak was accused of murdering his uncle, the final blow in a series of retaliatory killings between rival families. He did not resist arrest and went willingly with the RCMP officer to the Tree River detachment.

The police outpost had no holding cell, forcing Doak to detain Alikomiak in the barrack’s storage shed. Doak was not a large man, but he towered over the prisoner, who was “quite young, short and [of ] very slight build. ” Alikomiak’s cringing obedience soon earned Doak’s trust and he was given free run of the small detachment, performing menial tasks to appease his captor.

As the first feeble signs of spring arrived in 1922, Doak’s subordinates were all otherwise engaged, leaving him alone to supervise the accused. On March 31, Doak threw his sealskin long boots at a sleeping Alikomiak, then pointed to their fraying soles. He mimed a stitching motion, an implicit order to repair the boots. When the Inuit captive finished resoling the first boot, he showed it to Doak. The enraged corporal threw the boot back at Alikomiak. “I had not done it right,” Alikomiak later said, adding, “I was mad and did not feel good inside. ”

The next morning, Doak used the rare moments of privacy to sleep in. His service revolver was within easy reach, holstered and draped over the bedpost near his head. Just before sunrise, Alikomiak went into the “unlocked Police store house” and took a rifle and four bullets. He crept into the barracks and saw “that Doak was still asleep … on his right side with his face to the wall. ” Alikomiak moved to the left of the cook stove ten feet from Doak’s bed. He raised his rifle and fired once, hitting Doak in the left buttock.

The corporal awoke with a scream. He tried to sit up, but was in too much pain. Rising onto his left elbow, Doak looked at Alikomiak and shouted, “What is the matter with you?”

Alikomiak bolted out the door, but he paused to look through the window near the wounded man’s bunk. He saw that “Doak had turned in his bed with his legs hanging over the side and his head against the wall. He was groaning and his eyes were sometimes open. ” Blood flowed from the corporal’s mouth and Alikomiak knew “he was close to dead. ”

The Inuk returned to the sleeping quarters. He lifted Doak’s legs onto the bed and covered him with a blanket. Doak eventually lost consciousness and was dead before the sun cleared the horizon. According to police, Corporal William Doak would not be the only man Alikomiak killed that day.

He was arrested later that afternoon by Constable Daniel Harrison Woolams at a seal camp seven miles from the Tree River detachment. He did not resist arrest, asking only to change his boots before surrendering to police.

Alikomiak made a full confession through an RCMP translator. In his statement he recounted the killing in graphic detail, including Doak’s final words. That confession would be the sole evidence against Alikomiak in the trial that followed.

There are several glaring inconsistencies in Alikomiak’s account, irregularities that investigators, the prosecutor, jurors, and the judge failed to notice at the time and that all legal scholars studying the case have failed to notice in the decades since. One of the most obvious was that only two people were in the room when Doak was killed: the victim and the perpetrator. Alikomiak could not speak a word of English and Doak knew nothing of the local language. 4 Throughout his incarceration the two had communicated exclusively through hand gestures. So, how could Alikomiak possibly have known what Doak said in the moments before he died?

Komar puts her forensic skills to work and makes a convincing case that, in the rush to judgment, the real murderer was allowed to escape.

…a concise, scathing, and at the same time, sympathetic account of a travesty of justice committed against the Indigenous peoples living above the Arctic Circle.