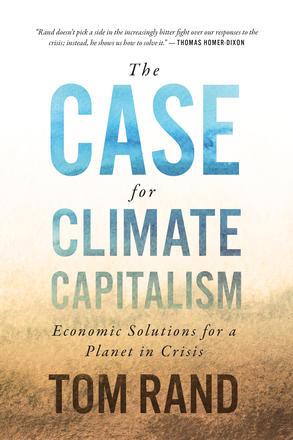 The Case for Climate Capitalism

The Case for Climate Capitalism

Tom Rand's climate change treatise is a rallying call to put aside our differences, reclaim capitalism, force profits to align with the planet, and transition to a low-carbon, clean-energy economy.  Publishers Weekly hails it as “[a] strong, well-reasoned argument for the ... Read more

Tom Rand's climate change treatise is a rallying call to put aside our differences, reclaim capitalism, force profits to align with the planet, and transition to a low-carbon, clean-energy economy.  Publishers Weekly hails it as “[a] strong, well-reasoned argument for the left and right to work together for the common good. ”

“A necessarily provocative take-down of economic, political and climate change orthodoxies paired with a radically practical plan for finally getting serious about saving ourselves. ” — Tim Gray, Executive Director, Environmental Defence

A warming climate and a general distrust of Wall Street has opened a new cultural divide among those who otherwise agree we must mitigate climate risk: anti-market critics such as Naomi Klein target capitalism itself as a root cause of climate change while climate-savvy business leaders believe we can largely continue with business as usual by tinkering around the edges of our economic system.

Rand argues that both sides in this emerging cultural war are ill-equipped to provide solutions to the climate crisis, and each is remarkably naïve in their view of capitalism. On one hand, we cannot possibly transition off fossil fuels without the financial might and entrepreneurial talent market forces alone can unlock. On the other, without radical changes to the way markets operate, capitalism will take us right off the climate cliff.

Rejecting the old Left/Right ideologies, Rand develops a more pragmatic view capable of delivering practical solutions to this critical problem. A renewed capitalism harnessed to the task is the only way we might replace fossil fuels fast enough to mitigate severe climate risk. If we leave our dogma at the door, Rand argues, we might just build an economy that survives the century.

Tom Rand is a recognized thought leader and public speaker on the necessity and economic upside of a rapid, global transition to a low-carbon economy. Tom is managing partner of ArcTern Ventures, a new father, sits on a number of boards, and finds it hard to believe we’re still having this conversation. He is the author of Kick the Fossil Fuel Habit (2010) and Waking the Frog: Solutions to Our Climate Change Paralysis (2014).

Climate change defies the traditional divisions between left and right. The response from the far left — led by Naomi Klein and the Pope — targets market forces, economic growth, and capitalism itself as the enemy. Yet climate solutions need all three. The far right — dominated by market fundamentalists like FOX and the Koch brothers — view unfettered markets, unlimited growth, and unregulated capitalism as unassailable foundations of the twenty-first century. But that view is incompatible with a livable planet. The simple ideologies of left and right are unhelpful in trying to solve this problem. It’s time to let them go. Common sense provides a better basis for climate solutions than political or ideological preference.

Climate Capitalism is a pragmatic response to a messy problem. To rewire our economy in time to head off disaster, the left and right need to throw out a bunch of comfortable assumptions. The idea that we’re going to jettison capitalism itself is as absurd as it sounds. We need high finance. And market forces. Yet both must be tamed. Unbridled market forces make for great toys and factories but will take us straight off the climate cliff. Not everything can be valued in money or commerce. Some things have worth that can’t be contained in a spreadsheet: the human spirit, our place in the world, values and ethics, our planet itself.

The current intellectual trend claims all of human activity can be captured in value-free quantitative analysis. That view is false. We can’t speak to the climate issue without the deep, reflective language of moral philosophy. Intergenerational justice is not measured by what economists call the “discount rate. ” The value of nature — the Amazonian rainforest, biodiversity, healthy watersheds — is not captured by estimating their monetary value. Our deeper qualitative concerns must bend (not bend to) the forces of commerce to be effective. Commerce is the tool, human values the force — not vice versa.

Yet this book is all about economics: money, trade agreements, discount rates, capital markets, entrepreneurs. Undoubtedly, my environmental friends won’t like the whole-hearted embrace of that language. And many business colleagues will bristle at the call for what they see as radical interference in those markets and a value first approach to weighing costs and benefits. That may be a sign I’ve got something right. In any good negotiation, both sides will feel like they lost. But both also win.

Things will get nasty in the climate debate as our world continues to get hotter. There will be fights — not just over ideas but water, food, land, and money. But one thing we can’t fight about anymore is which economic system occupies the high ground. The left and right, the business community and environmentalists, bankers and activists must together reclaim capitalism and force profits to align with the planet. We must retool our laws and institutions to reflect our collective long-term security. We can worry about who occupies the moral high ground later.

“Rand’s latest is an academically rigorous text that presents undeniable science proving climate disruption is the world’s foremost problem … Most impressive is Rand’s understanding of the global financial system and how much it fears market disruption due to rapid climate change. This book tackles a number of different topical issues, and it’s easy to imagine it being required reading at many colleges and universities. ” — Booklist

“[A] realistic and readable outline of solutions that could be implemented. Recommended for informed readers, in particular Canadians, who are concerned about climate change. ” — Library Journal

“[A] thoughtful treatise … Much of the book’s strength is in its practicality … [A] strong, well-reasoned argument for the left and right to work together for the common good. ” — Publishers Weekly

“If you’ve ever wondered just how dire a threat to civilization as we know it global warming is, this book will open your eyes … [Tom Rand] wants to retool and reclaim capitalism. Profit isn’t an ugly word in his vocabulary; he simply wants profit to align with creating a livable planet. And he spends much of the book convincingly arguing how this might be done. ” — Winnipeg Free Press

“Read this if you want to learn where to invest, which industries will have a robust future, and those that are in decline. For the thinking person The Case for Climate Capitalism is filled with practical ideas on how to fit your dwelling for the future, both politically and pragmatically … Though The Case for Climate Capitalism is brief, it is brilliant in outlining the thinking that must accompany changes in process, metrics, and measures to achieve enough of a reduction in harmful gases to sustain us all. ” — The New York Journal of Books