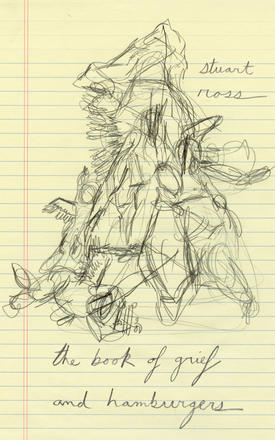 The Book of Grief and Hamburgers

The Book of Grief and Hamburgers

A poignant meditation on mortality from a beloved Canadian poet

A writer friend once pointed out that whenever Stuart Ross got close to something heavy and “real” in a poem, a hamburger would inevitably appear for comic relief. In this hybrid essay/memoir/poetic meditation, ... Read more

A poignant meditation on mortality from a beloved Canadian poet

A writer friend once pointed out that whenever Stuart Ross got close to something heavy and “real” in a poem, a hamburger would inevitably appear for comic relief. In this hybrid essay/memoir/poetic meditation, Ross shoves aside the heaping plate of burgers to wrestle with what it means to grieve the people one loves and what it means to go on living in the face of an enormous accumulation of loss. Written during the second wave of the COVID-19 pandemic, shortly after the sudden death of his brother left him the last living member of his family and as a catastrophic diagnosis meant anticipating the death of his closest friend, this meditation on mortality — a kind of literary shiva — is Ross’s most personal book to date. More than a catalogue of losses, The Book of Grief and Hamburgers is a moving act of resistance against self-annihilation and a desperate attempt to embrace all that was good in his relationships with those most dear to him.

Stuart Ross is the author of fifteen books of fiction, poetry and essays. His many dozens of chapbooks include Nice Haircut, Fiddlehead (Puddles of Sky Press); A Pretty Good Year (Nose in Book Publishing) and In In My Dream (BookThug). Stuart is a member of the improvisational noise trio Donkey Lopez, whose CDs include Juan Lonely Night and Working Class Burro. He is a founding member of the Meet the Presses collective and has his own imprint, a stuart ross book, at Mansfield Press. Stuart lives in Cobourg, Ontario, and blogs at bloggamooga.blogspot.ca.

“The Book of Grief and Hamburgers is an ode and celebration of friendships, family, and the footprints that they affectionately leave. ” — Excalibur

“Ross is a generous writer; he wants this ease for others, even if his own nature has a tendency toward melancholy. He would rather avoid the whimpers: If you want to cry, then cry. If you want to rage, climb to the top of the highest building and howl at the moon. When it comes to his own pain, he calls his deflections cowardice. But a more forgiving term would be ‘human. ’ A burger might be a means of avoidance, but it is also a reminder, a treat, a touch of levity in what can be a cruel and trying existence. Grab a chair. Order up. ” — Literary Review of Canada

“A series of bereavements (including that of a close friend and his brother) prompts the Canadian poet to muse on mortality with lyricism and irreverence in this conversational, and often darkly humorous, book-length essay, about a man who has a hard time engaging with grief. ” — Zoomer Magazine

“It’s the kind of book you can pick up and revisit — and I already have — rereading a passage here and there. It’s moving, elegiac, and deeply sad, but it’s also a comfort. ” — Bloggy Come Lately

“The humour and courageous honesty of The Book of Grief and Hamburgers offers relief to any of us who have struggled with despair during the pandemic and the exponential growth of grief as we age. ” — Northumberland Festival of the Arts