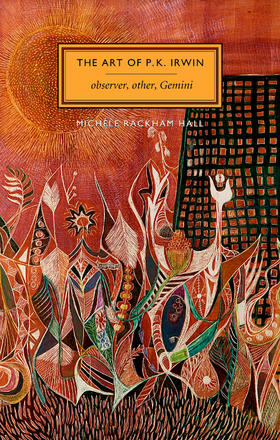 P. K. Page?the celebrated poet?was also a gifted visual artist working under her married name, P. K. Irwin. The Art of P. K. Irwin charts the evolution in her art, detailing an expansive range of artistic influences, from the geographical and temporal, to the poetic, artistic ... Read more

P. K. Page?the celebrated poet?was also a gifted visual artist working under her married name, P. K. Irwin. The Art of P. K. Irwin charts the evolution in her art, detailing an expansive range of artistic influences, from the geographical and temporal, to the poetic, artistic and spiritual.

Michèle Rackham Hall is a writer and professor whose numerous essays, articles, and reviews have appeared in such publications as English Studies in Canada, The Maple Tree Literary Supplement, Matrix, and The Bull Calf, among others. She completed her PhD in English Literature at McGill University on the intersections between poetry and visual art, and she once worked as a docent at the National Gallery of Canada, where she delivered public lectures on Canadian art and led educational programs for the permanent collection. In addition to teaching in the Communications department at Algonquin College in Ottawa, Michèle currently serves as Ed-Tech Development Coordinator at Carleton University.

If `place alters person,' then it should come as no surprise that there are as many P.K. Irwins as there are places she lived and visited. P.K. Page understood herself as having multiple personas. In her essay `A Writer's Life', she explains, `[t]he fact is, we live not one life but many, and this creature that answers to my name is not single, not simple, but multiple?a crowd' (4). While much has been written about P.K. Page, the poet, we still know relatively little about this multiplicious `creature' and her alter ego, her `other, Gemini,' P.K. Irwin, the artist. Recent studies, including Djwa's Governor General's Award-winning biography of P.K. Page and the volumes of the Collected Works of P.K. Page, have provided a refreshing glimpse of the artist's life and work. Each of these projects, however, focalizes that view of the artist through the dominant story of the poet. As the old adage goes, `there are two sides to every story,' and this is particularly true when there are two selves at the centre of the tale?at least two selves in the case of P.K. Page/P.K. Irwin. If her self-portrait Tryptich is any indication, Irwin recognized her own selfhood as manifold. This book provides an `alternarrative' of the poet-artist's career; one centred around the life of the artist, P.K. Irwin. I have attempted to keep the poet's and artist's `selves' as distinct as possible by using `P.K. Page' when discussing the writer's career and `P.K. Irwin' to refer to matters involving the artist and her work. These identities, however, became less and less autonomous as her career went on. The boundaries between artist and poet blurred as her art began to include poetry and her poetry incorporated her art. These border transgressions of the sister arts gave rise to the poet-artist, P.K. Page-Irwin, whose rarely discussed interarts practices will be examined here in detail. I hope to use the artist's varied names to illuminate the complexity of her career and the intricacy of her work, which clearly benefited aesthetically and thematically from the many `lives' she lived.

Within a series dedicated to the work of the lauded Canadian poet P. K. Page, Michèle Rackham Hall's The Art of P.K. Irwin captures and contextualizes the writer's complimentary work as a visual artist. Reflective writing and a wealth of supportive visual material make for an entrancing and informative volume.

Drawing from personal research, Page/Irwin's own writings, and time spent with the artist herself, Rackham Hall creates a portrait of an artist who never stopped experimenting with form-or finding ways to let her art articulate that which she was feeling most acutely.

A strategically added diary entry assigns the beginning of Irwin's visual artistic work to her time in Brazil, though Irwin had always doodled and experimented before that station as well. In that lush and vibrant setting, she suddenly found more cause-and encouragement-to turn from her poetic work and concentrate on experimenting with pens and color.

Personal tragedies and challenges are shown to have led to new creative bursts, as when a health crisis prompted works that were both elusive and deeply personal, and `abstraction began to dominate [her] oeuvre.' Irwin was drawn toward paper and canvas in times of spiritual quests and personal darkness, and sought out lessons and directions from fellow artists, even when sometimes such lessons seemed as much `barriers to her creative agency' as they did give her new means to express herself.

From natural to amorphous shapes, and from intricate and labyrinthian lines to stark geometric forms, Hall traces the artist's development. Rackham Hall shows the influence of New York School artists such as Mark Tobey upon her work, especially when it came to integrating her inclinations as a poet with her new-found role as a visual artist.

She also examines the impact of Irwin's personal life shifts on her creative practice. From moves to New York's exploding art scene to Mexico, which she found dark and depressing, and back to Canada, where she recollected her poetic footing, Irwin's confidence with various media shifted.

The white lines and lyric forms of Irwin's works are put into context, and colorful bursts in later work-as she found confidence with oils and tempera, and began to experiment with gold leaf-make for stunning additions on the page. Spiritual influences round out the work, both in the evocative celestial and geometric forms within pieces of art, and via Irwin's own words: `in all essential particulars writing and painting are interchangeable. They are alternate roads to silence.'

Hall's volume draws meaning and continuity from the vast and diverse body of P. K. Irwin's visual art, and is both a contemplative and sensory pleasure to journey through.

`[The Art of P. K. Irwin and Mexican Journal are] two fine books from The Porcupine's Quill, both lavishly illustrated with superb reproductions of P. K. Page's art.... Michèle Rackham Hall's The Art of P. K. Irwin ("Irwin" being Page's married surname and nom de brosse) follows the evolution of her visual art from the 1950s onwards...'