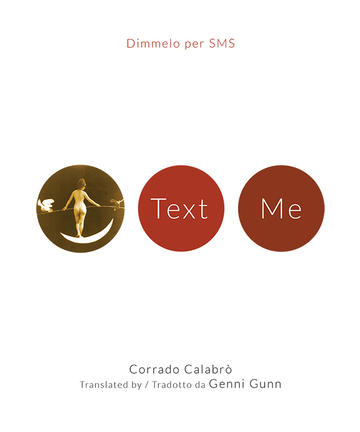 A bilingual English-Italian collection of love poems, Text Me/Dimmelo per SMS expresses through language and metaphor the many ways to say "I love you." Calabrò's poems often evolve from the experiences of the body: from sensual impressions, "Your cheek on my weary shoulder ... Read more

A bilingual English-Italian collection of love poems, Text Me/Dimmelo per SMS expresses through language and metaphor the many ways to say "I love you." Calabrò's poems often evolve from the experiences of the body: from sensual impressions, "Your cheek on my weary shoulder / the day pales, your lips pale / up, up, one more wing-beat / till we run out of oxygen";  to image, "In cold blood / the ice contrail of a Phantom jet /stabs the blue. / Like a blade in honey / you plunge your gaze into my heart"; to memory , "We met and I kissed you / already consumed by the need to betray you." Although rooted in Calabrò's Mediterranean, these poems have a universality which give voice to our common burden of love, sorrow and guilt.

Corrado Calabrò, born in Reggio Calabria, completed his first book when he was twenty and has since published seventeen more collections. HIs poems have been translated into more than a dozen languages and they have been collected in a theatre recital that toured extensively throughout Italy, Europe, Australia, and South America. His novel, Ricorda di dimenticarla, a finalist for the Strega Prize, was the basis for the 2006 movie Il mercante di pietre, (The Stone Merchant). In 2011 Calabrò was awarded The Cetonaverde Prize for career achievement.

There are no notes
without silences

trains without stations
flights without landings

words of love
without white spaces.

Corrado Calabrò pursues, with a tension that is both lyrical and philosophical, his own ultimate confession. Calabrò orchestrates stunning concerts for the mind, woven among a merciless feeling for existence, love, and time.

In today's Hallowe'en-perfect musing, we wondered: if literature's classic monsters had a literary appetite, what would they read?

Other titles by Corrado Calabrò